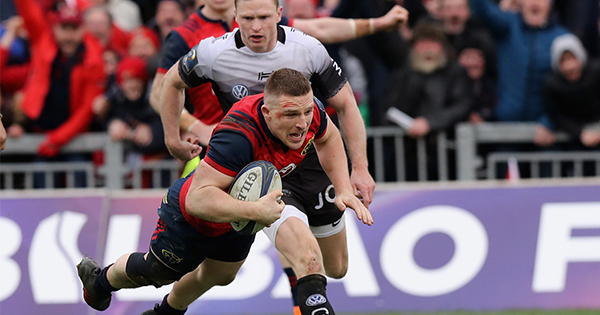 A magnificent individual effort from Andrew Conway helped Munster see off Toulon for a spot in the European Champions Cup semi final in a game full of controversy. Munster will meet Racing 92, after they beat Clermont.

With six minutes left to play and six points down, Munster needed a try to put pressure on the French giants and Conway did just that with a superb piece of running.

Francois Trinh-Duc’s clearance kick missed touch and, doing extremely well to catch the ball above his head while balancing in play, Conway glided through the attempted Toulon defence to send Thomond Park into raptures.

Earlier in the match Conor Murray’s knowledge of the laws saw him take advantage of another Toulon mistake to score.

With the away team scrambling to clear the ball from their own line, hooker Guilhem Guirado dropped the ball while attempting a pick-and-go, and quick as a flash Murray was on the ball to dot it down.

The scrum half immediately looked up and told referee Nigel Owens that there was a knock on so therefore he wasn’t offside and he had scored, and, after an age deliberating with the TMO, Owens agreed.

“It’s a very intelligent try,” said captain Peter O’Mahony afterwards. “We were taking the mick out of him inside there, saying it was a handy one, but you’ve got to be switched on for something like that.

“That’s the type of player he is, very bright, very diligent.  And, you know, a lot of guys wouldn’t even have the balls to go and do it.”

There’s a strong argument that Munster should never have been in that position to start with though.

With just 30 seconds in the match gone, Simon Zebo was lucky to escape a yellow card and potentially a penalty try after he looked like he punched the ball out of Chris Ashton’s hands and out of play.

Again, after speaking to the TMO Owens decided that he was trying to catch the ball and that it was a knock on by Ashton.