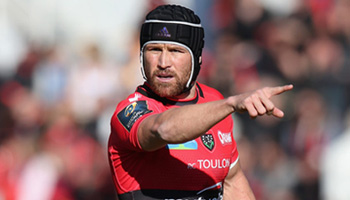 Sometimes it takes a sea change to reinvigorate yourself. Toulon playmaker Matt Giteau knows this more than most. Giteau was in Australia recently following injury, but has since returned to France, playing for Toulon in their Champions Cup Quarter Final against Wasps.

The reigning Top 14 player of the season made his international debut for the Wallabies at the age of 20, amassing 92 tests and 104 Super Rugby games before leaving the country in bitter circumstances in 2011.

Bagged by the media, his coach and fans the curtain fell down on his glittering international career with the Wallabies infamous 32-23 loss to Samoa that year.

‘Exiled’ to the Top 14, Giteau signed with Toulon, trading the cold of Canberra for the Mediterranean coast of Southern France.

Four years later Giteau is, considered by some, in the form of his career steering Toulon to back-to-back European championship titles and securing the Top 14-Europe double last year.

“He’s exceptional, I don’t quite know how a team ever let him go in Australia to come over here,” Wilkinson commented late last year.

However, despite his stunning form Australia’s current eligibility laws rule out any future caps for the 32 year old, automatically disqualifying overseas players.

Giteau has largely credited his turnaround to the birth of his sons, Levi and Kai, and the increased work-life balance playing in France has brought his family.

Australian fans will want to remember their names, as Levi and Kai certainly have sporting pedigree. Their mother Bianca Franklin is a professional netballer and sister to Australian Football star Buddy, while Matt’s father, Ron, also captained the Canberra Raiders in the NRL.

Giteau was back in Canberra recovering from groin surgery recently so caught up with the guys from Rugby HQ about his rollercoaster career.

Would you pick him in the Wallabies squad for this year’s Rugby World Cup?