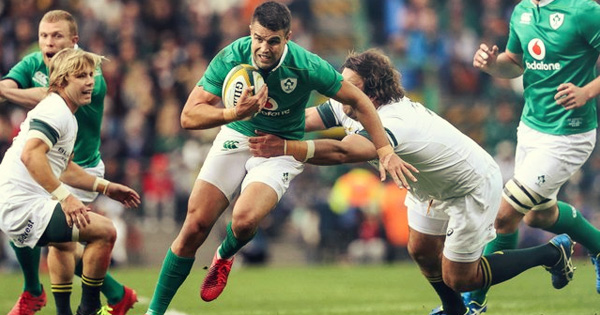 Ireland achieved a famous victory away from home, beating the Springboks in South Africa for the first time ever, and did so with just 14 men following a controversial red card. If Ireland win at Ellis Park next weekend, they win the three-match series.

Newlands witnessed an error-strewn Springbok performance as new coach Allister Coetzee started his reign in disappointing fashion, going down to a visiting team despite having a numerical advantage for the majority of the match.

Pat Lambie was taken out by Ireland’s South African flanker CJ Stander, resulting in referee Mathieu Raynal making the bold call to send the Munster man straight from the field.

The decision was met with anger and dismay on social media, with plenty of South Africans even commenting that the contest had been ruined. Little did they, and the Springbok players, realise that Ireland were about to put in a hugely courageous performance, punishing the lacklustre home side to leave Cape Town with a historic 26-20 victory.

Ireland also lost Robbie Henshaw for ten minutes due to a dangerous tackle on Lambie’s replacement Elton Jantjies, but Conor Murray’s second half try and Paddy Jackson’s accurate boot were enough to keep them ahead, despite a Pieter-Steph du Toit intercept try and JP Pietersen coming close to scoring with time up.

“We knew to come here and get a victory would be unbelievably tough and require a massive physical performance,” said Ireland captain Rory Best. “We dug really deep to get that win. If we had sat back and kept giving them ball we would have eventually run out of steam, so we had to take the game to them.”

Springbok skipper Adriaan Strauss lamented the errors. “Every time we had the ball we lost it with unforced errors or gave away a penalty. There were easy mistakes which cost us.”

Stander will find out on Monday if he will be suspended following the red card, after Sunday’s disciplinary hearing was adjourned and will be continued in the morning.