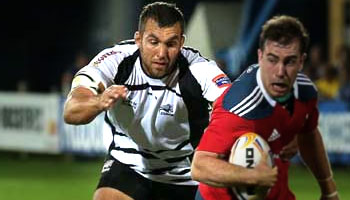 Munster beat Zebre 43-21 in their Pro12 match in Parma on Friday, coming from behind after trailing 18-9 at halftime. Both sides scored some good tries, and there was also this cracking hit, that could be heard from far, to welcome the visitors.

Zebre started well and just five minutes into the clash gave the crowd something to cheer about with this solid tackle on Johne Murphy by Italy lock Quintin Geldenhuys.

Murphy had passed the ball so the timing might have looked slightly off, but the tackler was committed and according to the referee, it wasn’t a late shot. It was a bit of a mismatch, but we all love seeing a big tackle and this one could be heard nicely through the refs mic.

Zebre scored well taken tries through Luciano Orquera and Andrea De Marchi, but Munster came back in the second half and scored through Paddy Butler, Denis Hurley, CJ Stander and Ian Keatley.

It will have been a tough pill to swallow for the home side, who were looking for their first win of the competition, and looked well placed at the break before Munster kicked into gear and pulled away.

View full match highlights on page two, and a quick clip of the cracking hit below