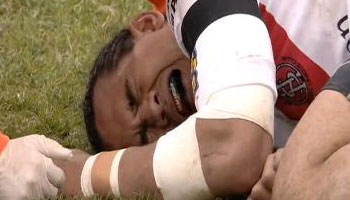 I don’t often post Rugby League clips on Rugbydump, but, there’s time when I’ll come across a tackle or incident that really is worth sharing, as on this occasion.

Former Samoan rugby union player Maurie Fa’asavalu, who incidentally is now eligible to play League for Great Britain after living there for four years, is the victim of a cracking hit from Thomas Leuluai in this match between St Helens and Wigan.

Leuluai is a New Zealander playing his rugby for Wigan in the UK, and by the look of things, knows how to dish out the big hits. Leuluai hit Fa’asavalu so hard here, that the game had to be stopped for a while so he could recover. The best part about this is that, unlike a lot of the League hits we see, the hit is perfectly legal.

It’s also great to see how Fa’asavalu gives the thumbs up after he recovers finally.