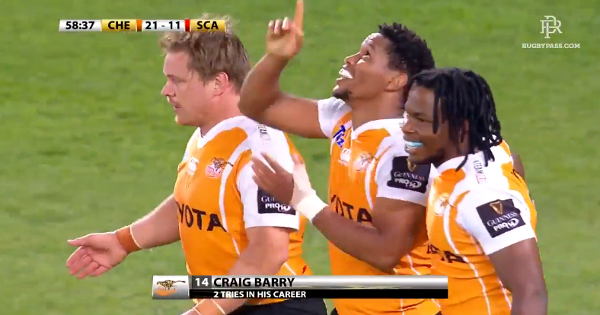 Following the latest round of Guinness PRO14 action, the Cheetahs picked up their sixth win of the competition after beating reigning champions Scarlets 28-21, in Bloemfontein. This moment from Craig Barry lit up the Free State Stadium.

A try from William Small-Smith, and a brace from Barry was enough for the hosts to claim victory.

At the 58 minute mark Barry, gathering a kick downfield from 15, showed true individual brilliance on the counter-attack as he broke down the middle beating four defenders before going in under the sticks for his first of the evening.

The Scarlets were able to reduce the deficit back to five points less than four minutes later after an Ioan Nicholas try. However, the home side only increased their lead following Barry’s second of the evening.

A Scarlet’s penalty five minutes from time set up a tense finish, but the hosts were able to cling on for the seven-point victory.

This weekend there is no PRO 14 action due to the European matches taking place, so if you missed this try, catch up now as the Cheetahs continue to have an impressive first season.