Crunching tackle plants fullback into the ground in Florida, USA 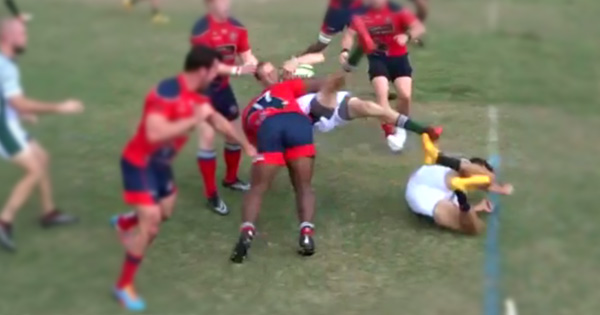 This short clip was brought to our attention via our Facebook page and features a spectacular looking tackle from the recent Boca Raton vs Naples match in the Florida Rugby Mens second division in Boca Raton, Florida.

There was quite a bit of debate about it online, with some saying that it was an illegal, dangerous hit, while others complained that tackles like this should not be ‘glorified’.

Most seemed to enjoy it, and if you watch closely it looks as though the fullback on the wrong end of the hit might have actually had his legs swept out from under him by his own player, thus causing the flipping motion that made him land in that way.

The tackler was penalised, but it was for not releasing the player, not for an illegal hit.

Whichever side of the fence you sit on, there’s no doubt that the impact was massive and as has been reported, the fullback in question got up with no complaints and finished the match.