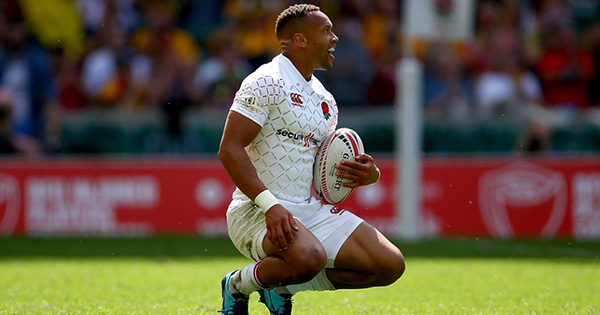 England’s Dan Norton smoked Carlin Isles and team USA with his near length-of-field try from day one action of the London Sevens.

The crowd at Twickenham were treated to the sight most fans long for, that of stars Norton and Isles clocking in at 37 km/h in an all-sprint down the field. The chase and score certainly didn’t disappoint. With his subtle change of direction for the score, it was Norton who came up the winner.

No doubt Norton will remember being burned himself earlier in the year by speedster Perry Baker at the USA Sevens in Las Vegas and will be happy to have gotten some redemption.

Isles did well to recover and offer chase after Notons’s break. All the same, it was hopeless and Isles will have to bide his time in hopes that the roles can soon be reversed.

Despite, the brilliant try, the Eagles won the match 31-14.

The USA ended up sixth overall after losing heavily 26-5 to New Zealand in the fifth place playoff, while England came fourth after being upset 21-19 by Ireland for third place.

Fiji beat South Africa 21-17 in the final to win the tournament.