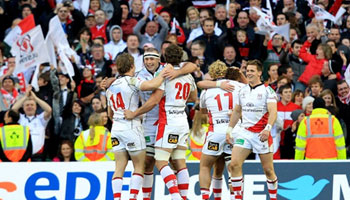 Springbok Ruan Pienaar put in a flawless kicking display as Ulster beat Edinburgh 22-19 in the first of the Heineken Cup semi finals on Saturday. Today we’ve got quick highlights from the game, as well as two of the biggest hits.

A controversial first half try from South African Pedrie Wannenburg gave the Ulstermen an early lead before the game turned into a kicking dual between Pienaar and Edinburgh’s Greig Laidlaw.

Both were outstanding, but it was Pienaar who took all his opportunities, stretching Ulster’s lead in the second half. He was humble in victory, choosing to pay tribute to his forwards and make the point that despite the celebrations after the game, there is still a lot that can be worked on.

“The scrum went brilliantly, and the line-outs, but it was disappointing that we didn’t get a lot of opportunities in the first half as we were defending most of the time,” Pienaar said.

“It wasn’t our best performance, we’ll have to improve, but we’ll take the victory and know that we’ll need to work hard over the next couple of weeks,” he added.

Two of the biggest hits from this game are included here in one video. First it’s Darren Cave’s massive tackle on Jim Thompson, and then Johan Muller’s midfield hit on Matt Scott.

We’ve also got quick highlights from the match, including both tries, some of Pienaar’s impressive kicks, and the Stefan Terblanche yellow card for smacking Ross Ford around the ears.

The videos are presented as a playlist below, hits first, then the highlights. Use the video controls to navigate, or just push play once and watch both enjoyable videos.