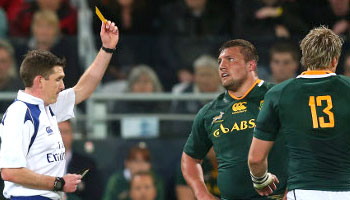 Springbok prop Dean Greyling had a nightmare of a game against the All Blacks on Saturday, as he missed one crucial tackle in particular, gave away a handful of penalties, and was yellow carded for a strike on Richie McCaw.

Greyling was cited after the match, and yesterday handed a two-week suspension, which in effect sees him only miss one game, a ruling that some have felt is quite lenient considering that Eben Etzebeth received the same punishment for his mock-headbutt on Nathan Sharpe.

McCaw had another incredible match, one of his best performances in recent times, and he took the forearm to the face well. All Blacks coach Steve Hansen called it a ‘cheap shot’, while Springbok coach Heyneke Meyer condemed it, and offered an apology.

SANZAR Judicial Officer Paul Tully said that although there was no injury, the strike had the potential to cause serious harm. He added that Greyling pleaded guilty to the breach of the law.

Jean de Villiers stated that Greyling will be dealt with, most likely in the form of a hefty fine. “We’ll never condone playing dirty,” De Villiers said. “Like the coach said, discipline is a non-negotiable for us and definitely if he was in the wrong we’ll take action internally against him.”

Greyling will miss the next Springbok match, when they host Australia in Pretoria on 29 September.