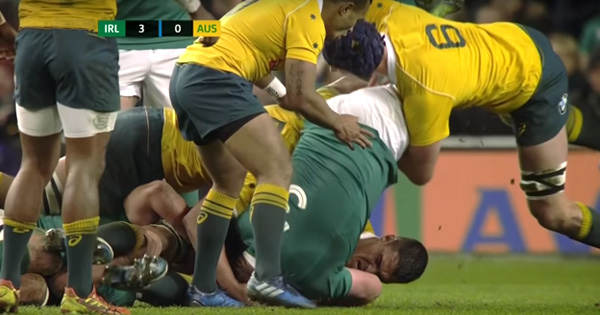 Wallabies forward Dean Mumm appeared before an independent disciplinary committee in London today, charged with committing a dangerous lifting tackle during the 27-24 loss to Ireland in Dublin. Mumm was cited for contravening Law 10.4(j).

Mumm was yellow carded during the match but a citing followed, so he had to go through the disciplinary process today.

The flanker, who usually plays in the second row, accepted that he had committed an act of foul play, but asserted that it would not have warranted a red card.

Law 10.4(j) is described as follows: Lifting a player from the ground and dropping or driving that player into the ground whilst that player’s feet are still off the ground such that the player’s head and/or upper body come into contact with the ground is dangerous play.

The Disciplinary Committee, chaired by Simon Thomas (Wales), alongside Bonike Erinle (England) and Derek Bevan (Wales), viewed video footage of the incident, listened to detailed evidence and representations from and on behalf of the player, and reviewed all of the other evidence.

They concluded that, although Mumm had indeed committed an act of foul play, the particular circumstances of the incident meant that his actions would not have warranted a red card.

Therefore no sanction was imposed and he is free to resume playing immediately.