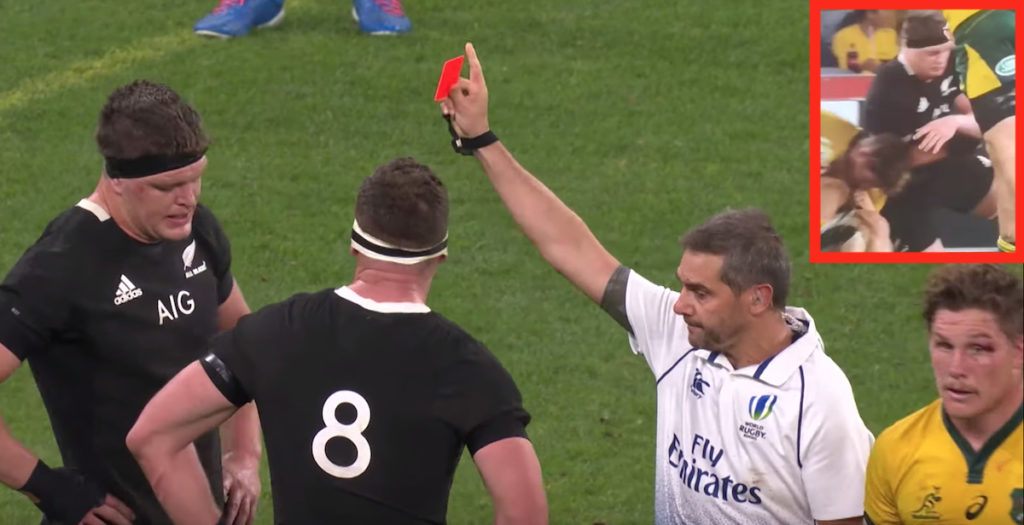 Scott Barrett became the fourth All Black in history to receive a red card when he was sent off by referee Jérôme Garcès for a dangerous tackle against Australia on Saturday.

Barrett made a no-arms tackle on Australia’s Michael Hooper just before half time and Garcès said on the pitch that he made “contact with the neck area and the face with force with the shoulder and elbow direct.”

The decision was a huge turning point 30 seconds before the break and the Wallabies went on to win 47-26 in Perth.

Just caught up with @qantaswallabies awesome 47-26 win over the @AllBlacks!

1- It’s great to see Australia dust up the NZ and it shows how wide open the @rugbyworldcup will be.

During the half time break, Sky Sports pundit Will Greenwood said: “If that’s a red card, then there are so many more incidents like that that go unpunished.

“Every time you have Garcès in charge, you know there is going to be a big call [in which] he hides behind the rule book.

“There’s contact to the head but that sort of stuff happens in the breakdown all the time. It’s different to the Sonny Bill (Williams) incident because he was standing up and dipped the shoulder into the head at pace. No way was this a red card.”

The Sonny Bill Williams incident which Greenwood cites was two years ago playing against the British & Irish Lions when he made this tackle on Anthony Watson:

But some fans didn’t agree with Greenwood’s comments on Garcès:

Isn’t it the job of a @SkySportsRugby pundit to question decisions on the field??? By the way I’m #yellow was dangerous but was there the intent to hit back of the head? Hooper was on his way down and turning!!!

And it wasn’t just the game on Saturday which the decision may effect.

That’s a monster call in the context of how referees could implement the high-tackle/shoulder-charge sanction checklist at RWC 2019. Jerome Garces *not* shy.

Every major international game seems to have at least one big talking point around a refereeing decision, but what do you think about this one?