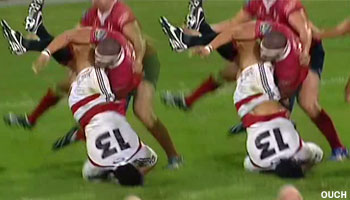 Queensland winger Digby Ioane has been suspended by the SANZAR judiciary for a spear tackle in the Super 14 this last weekend.

Ioane was suspended for four matches after pleading guilty to the dangerous tackle on Canterbury Crusaders centre Casey Laulala in Brisbane on Saturday.

Ioane was given a yellow card on the field despite the touch judge and referee clearly considering a red at the time, watched ever so closely by Reds captain James Horwill.

Laulala, the victim who had his face driven into the turf, got up and resumed play after some medical attention.

Queensland are already out of the running for a spot in the playoffs but face the Waratahs in the final round, which Ioane will of course miss due to the suspension.