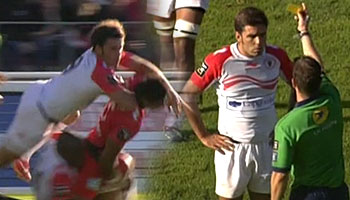 Biarritz scrumhalf Dimitri Yachvili was yellow carded for dangerous high tackle against Toulon in the Top 14 this past weekend. Delon Armitage, who we have seen dish out a few of his own in the last few years, was unlucky to be on the receiving end.

Armitage wasn’t badly injured by it but he did stay down for a while, clearly shaken by the swinging forearm to the face. Yachvilli received his marching orders, even though he didn’t look too pleased.

Both are highly competitive characters, so when Armitage broke and was only just caught by Zee Ngwenya, Yachvili made sure he was there to put in a hit. Unfortunately it was in the face.

Armitage hasn’t been too popular with fans in France, particularly after the hand gesture incident with Brock James in the Heineken Cup final. You can actually hear a bit of a boo and some whistles when he set off with the ball at the start of this clip.

Some in the crowd also probably felt he was milking it, but after seeing the replays of Yachvili’s tackle, it’s no surprise that the former England fullback stayed down.