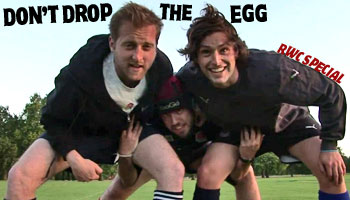 A few weeks back we featured the brilliant mokumentary Don’t Drop the Egg, which took us on a fascinating journey into the lives of three Clapham Falcons rugby heros. Today, they’re back with a Rugby World Cup special, exclusively for Rugbydump.

Since the airing of the original Don’t Drop the Egg, life has changed for the guys that captured the minds and hearts of millions around the world. They’re now, practically famous. So with great power come’s great responsibility, which is why we’ve made a World Cup Special.

Ollie, Freddie, and Archie have been preparing for the tournament in New Zealand. While they’re unable to travel there because of commitments to their beloved club, the Falcons, they have come up with other ways to show their support for the event, and of course, their country.

Blazeby (6, sometimes 7) figured that the best way to deal with the early morning matches is to simply switch things up and eat, sleep, and drink as if he were in New Zealand. He can even be seen wearing a black jersey. Throw in beer, lash, and banter, and we’re in for another fascinating ride.

The camera will be rolling throughout the tournament, so we’ll hear back from the lads after the final. Drop a comment down below to let us know if you enjoyed catching up with them again. Come on the Falcons!