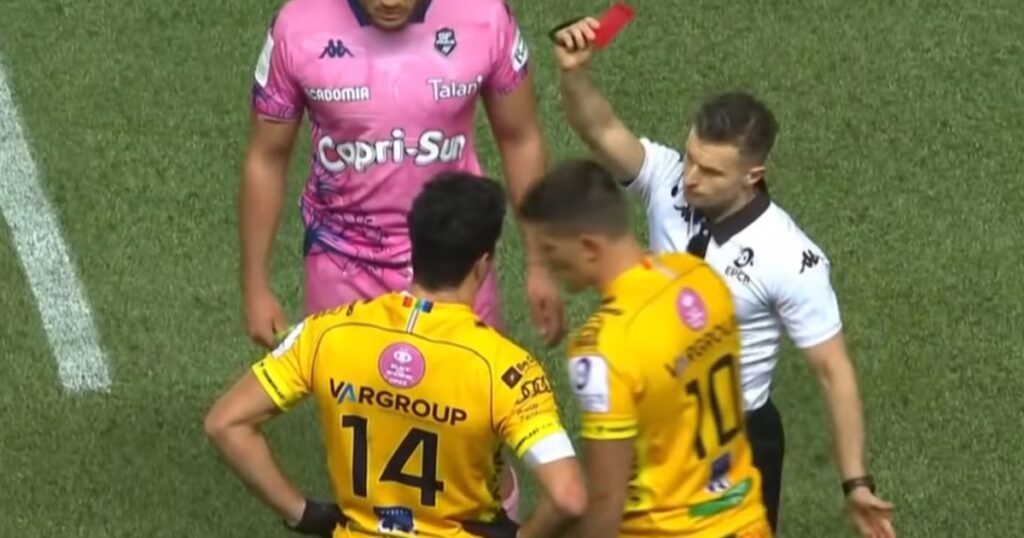 Benetton recorded a commanding 44-20 victory over Stade Français on the opening weekend of the European Rugby Challenge Cup, but the match was soured by a shocking testicle-grabbing incident which led to two red cards.

Stade back-rower Charlie Rorke was the instigator as he grabbed the front of Benetton winger Leonardo Sarto’s shorts, effectively giving the Italian a wedgie, which produced an immediate reaction.

Sarto, understandably aggrieved by the testicle grabbing, lashed out and punched Rorke in the head.

Referee Ben Blain consulted with his TMO Eric Gauzins and was succinct with his reasoning with an inexplicably bemused Rorke, who was dismissed from the field.

Sarto was also red carded and both sides played the remainder of the match with 14 men.

Rorke is likely to recieve a lengthy ban for this latest ugly incident, with England’s Joe Marler copping a 12-week ban – albeit missing only one match due to COVID-19 induced cancellations – for a significantly less grab on Wales’ Alun Wyn Jones.

Benetton had been comfortably in control of the match at the timing of the incident, which occurred just three minutes into the second half, following tries from Toa Halafihi, Dewaldt Duvenage, Sarto and Jayden Hayward.

Stade produced a better second period but Benetton didn’t let their foot off the gas and rounded out an easy win with further scores from Tomasso Allan, Federico Ruzza and Alberto Sgarbi.