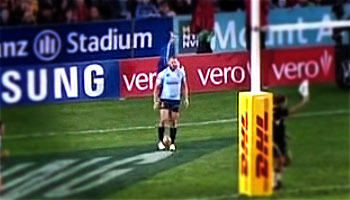 Drew Mitchell and the Waratahs got used to standing behind their posts on Saturday as they conceded five tries and Leigh Halfpenny slotted eight kicks at goal. Early on Mitchell made things a bit more interesting, showing a great piece of skill as he caught the ball between his feet.

You may have missed it live, but we’ve had many requests as it was clearly quite impressive.

His good mate Adam Ashley-Cooper caught one behind the back recently, which was also from a Halfpenny kick, and in the past John Eales was known to get up high and catch the ball before it went over. That was since outlawed, despite it being good fun to see whenever it happend.

This is just a little something extra that you might enjoy seeing, and trying during your next game.

View highlights from the Waratahs vs Lions match