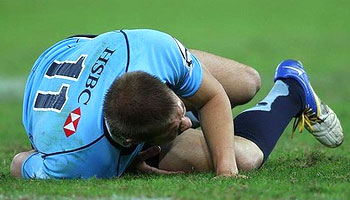 Drew Mitchell’s World Cup aspirations are almost certainly over as he picked up a horrific injury in Saturday’s Reds vs Waratahs Super Rugby derby game in Brisbane. Mitchell suffered the injury when colliding with Scott Higginbotham.

The screams could be heard sideline as Mitchell went down in a heap clutching his leg, writhing in pain from a dislocated ankle and fractured fibula. Medics rushed on and managed to get the ankle back in place fairly quickly, but he will be out for the rest of the Super Rugby season as a result, and more than likely the World Cup too.

The injury came when Mitchell chased a kick-ahead but was impeded by Reds number eight Higginbotham, who looked to have changed his running line and lent his weight into the Waratahs flyer. While injuring him wouldn’t have been the intention, opposition coach Chris Hickey was very disappointed with what happened.

“He would be devastated, particularly when it happens in an incident, someone deliberately does something that causes something to happen. It was (deliberate) and that is disappointing.

“You have a lot of mixed feelings, disappointment, anger, particularly for Drew. It’s a World Cup year and his form both last year and this year have been outstanding.

Mitchell underwent an operation in Brisbane on Saturday which will sideline him for near on six months. It would take some kind of miracle recovery for him to be back in time for the World Cup, but the man himself is optimistic. He tweeted earlier ‘Surgery apparently went well (not that they’d say otherwise haha) with a bit of luck, I’ll be back on deck in a few months’.

There have been no official complaints from the Waratahs towards Higginbotham.

FYI, it was unpleasant to watch, but not too graphic as there weren’t many replays. If you’re squeamish at all though, please rather opt out of watching the video below.