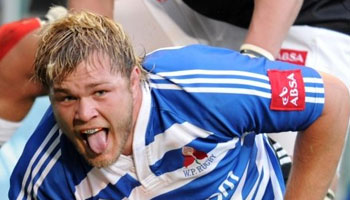 Western Province secured a Currie Cup home semi final on the weekend by beating the Sharks 33-21 at Newlands. It was a great game, with highlights to follow, but for now here is one of the best moments of the match.

Duane Vermeulen has been in great form of late and for many, should be on the end of the year tour with the Springboks. While it seems that Pierre Spies in unmovable as first choice, the aim for Vermeulen would be to jump ahead of Ryan Kankowski in the pecking order.

Province fans will tell you that Vermeulen should be first choice, while ardent Bulls and Sharks fans will no doubt disagree. Thats just the way it goes and despite all the pressure and criticism of Spies in recent times, its pretty safe to say that itll take a lot to bump him off the top spot.

This isnt about that though, this is about Sharks center Andries Stauss absolutely smashing Vermeulen in the first half of the match. It was a fantastic tackle but didnt stop the workmanlike Vermeulen, who then got up and without his boots on chased down gasman Lwazi Mvovo, another possible end of year tourist.

Why was Vermeulen bootless? Watch at the beginning of the clip when he and Bismarck Du Plessis go head to head and youll see that the one boot popped off then. What probably happened is that he wanted to keep up with play, so just took off the other.

It made for a comical incident though and even without the boots, he showed his pace and commitment by chasing down Mvovo, one of the top try scorers this season. Great rugby all round first the confrontation with Du Plessis, then the Habana run, then the cracking hit, and finally the great chase. An outstanding few minutes of rugby.