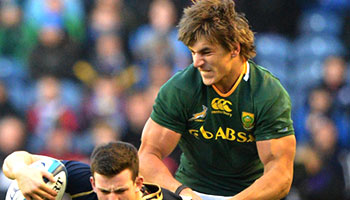 Lock Eben Etzebeth has been cited following the Springboks’ 21-10 victory over Scotland in Edinburgh on Saturday. The IRB disciplinary hearing was due to take place today but we’re still waiting for the outcome.

Etzebeth has played a pivotal role in not only the Bok lineout success, but their strong forward play in general. If suspended, his loss will be a major blow ahead of the England game at Twickenham.

He has been cited by independant citing commissioner Alan Mansell of England.

The citing arises after he is alledged to have made contact with the “eye of eye area” of Scotland number ten Greig Laidlaw in the second half of the Murrayfield Test.

If deemed to be guilty, Etzebeth will face a lengthy ban that would cause a major disruption to the Springbok forwards, as well as further tarnish his reputation. The 21 year-old was recenty suspended for what was ruled to be a ‘head butt’ on Nathan Sharpe.

He has been cited under Law 10.4(m): ‘Acts contrary to good sportsmanship. A player must not do anything that is against the spirit of good sportsmanship in the playing enclosure.’ The IRB’s recommended sanction for eye-contact is a low entry point of 12 weeks, and a max of three years.

Coach Heyneke Meyer said that he couldn’t comment on the incident as the case was still under way, but that they had heard mutterings about a citing before it was officially announced, so already had a legal team putting together their defence.

Below is a clip of the incident. It looks as though he pulled his hand away as soon as he realised where it was, but any contact with the eye will always going to get you in hot water.

On a positive note, the video starts with a great tackle.

*UPDATE: Etzebeth has been found not guilty and is free to play against England