Edinburgh's Netani Talei manhandled over his tryline by Munster 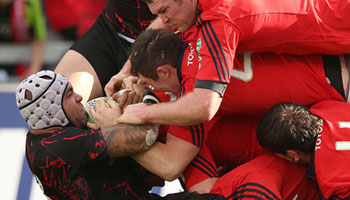 Round two of the Heineken Cup produced plenty of action and all sorts of interesting moments, including this from Munster’s 33-0 demolition of Edinburgh at Thomond Park. In the first half Munster made their intentions clear up front.

Munster had led just 6-0 at halftime, but scored four tries in the second half to secure a bonus point. First number nine Conor Murray crossed, then they scored three late tries, through Peter O’Mahony, Sean Dougall and Damien Varley.

Edinburgh lost 45-0 to Saracens in the opening round so this heavy defeat added to their troubles, and while they may have thought they were off the hook early on when Donncha O’Callaghan failed to collect a Keatley cross-field kick, the resultant scrum proved to be a kick in the teeth.

Number eight Netani Talei picked up at the base only to be smashed back like a rag doll by a red wave of Munster forwards, lead by halfback Murray and flank Sean Dougal. Talei landed up way back over his own tryline, and a statement was well and truly made.

Edinburgh, last year’s semi-finalists, now have little chance of success in Pool One as they failed to claim a point from the opening two rounds of games, conceding 78 points and not scoring any.

This moment probably best sums up their opening two fixtures.

“Losing your first two games and getting no points is a recipe for being out of the competition. You have to acknowledge that,” said coach Michael Bradley.