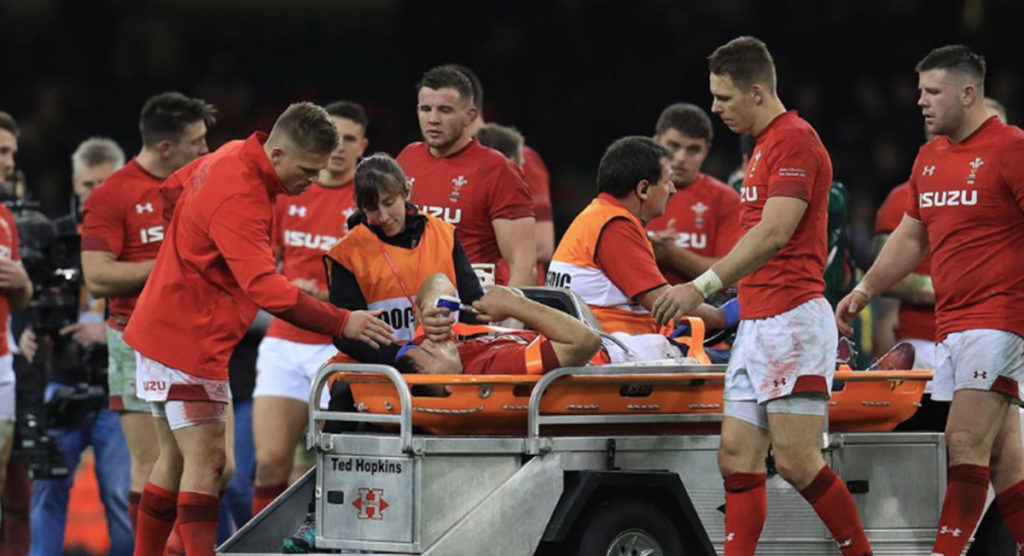 On Saturday night Wales Flanker Ellis Jenkins had a memorable night, securing Man of the Match honours in a 20-11 victory over South Africa. Tragically, the dream turned into a nightmare as he sustained a serious knee injury in the very last minute of the match.

What makes the injury all the more upsetting is that Wales were holding an insurmountable lead. South Africa were looking for one last late score when Handre Pollard and Eben Etzebeth combined to roll Jenkins off of a ruck in a dangerous and awkward way, his scream being heard over the noise of the pitch. Moments later, George North was awarded a penalty that ended the match.

Meanwhile, Jenkins was still on the floor getting attended to by paramedics. He was eventually stretchered from the field. Though news of the Monday scans has not been updated yet, many fear the worst in the form of a torn anterior cruciate ligament, the result of which could keep him off the field for many months to come.

“There’s nothing you can say,” said Jenkins of the moments following the injury.

“Any time anyone came up to me and gave me a hug or tried to say something nice I almost started crying. So I just sort of said ‘I know what you’re going to say’.

“It’s just terrible luck I guess. It’s nice that everyone says congratulations and stuff but it’s tough to think about when you get a serious injury at the end of the game.

“When you feel like you’re playing well, you want to keep going. It would be nice if the game had finished thirty seconds earlier.

“My foot has just got stuck. There are two big boys who have tried cleaning me out. I guess I’m a little bit tired at the end of the game as well and maybe not in as strong a position I should have been in. It’s one of those things. It’s part of the game, unfortunately.

The incident has yet again highlighted a tactic known as “croc-rolling”, where a player is grabbed around the waist and rolled off of the ruck. Rule 16.3, concerning rucking, gives specifics on what is not allowed, ie: staying on one’s feet, not intentionally falling or kneeling in, and not intentionally collapsing a ruck.

Many see this move as a potential career-ender and wish to see it banned completely, not merely penalised. Former Fiji Sevens coach Ben Ryan has been a leading voice on the issue for some time.

@benjaminryan Sadly another serious incident from a body roll.

Gatland seems to think it is his ACL. https://t.co/LfYGiVkyNZ

It’s always sad to see players struck down with injuries, especially in times of triumph. Hopefully, the scans will come back negative and the worst can be avoided.

“I’ve been trying to keep my knee moving and get the swelling down.

“If I need surgery I need to keep the swelling to a minimum otherwise it just delays the process.”

Injuries aside, one major silver lining for Wales is that this marks their fourth consecutive win over the Springboks. They’re also now on a nine-game winning streak, including all four Autumn Internationals.

While all the Northern Hemisphere chatter seems to be focused on Ireland at the moment, Wales seem to be perfectly content flying under the radar and building on their recent success. It’s widely believed they have the depth to make a serious push at next year’s World Cup in Japan.