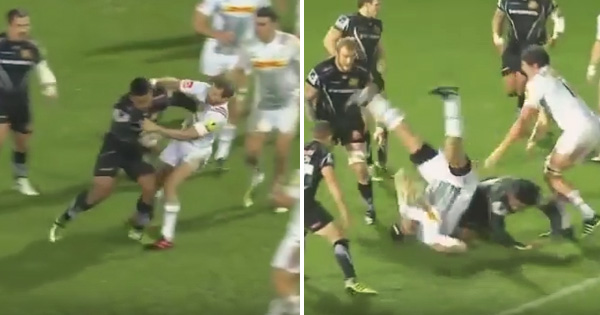 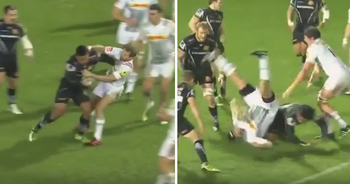 Elvis Taione had a mixed game for Exeter Chiefs against Harlequins recently, bumping Nick Evans to the ground before receiving a yellow card for a dangerous no-arms tackle.

During Exeter’s narrow 26-25 win over Quins, in which Evans scored 10 points for the visitors, substitute Taione built up a head of steam and promptly bumped the Kiwi aside before being hauled down by Nick Easter.

The Tongan international then turned from hero to villain though after flying in to a tackle on Mark Lambert, causing the prop to land dangerously on his neck.

It’s the type of tackle that referees are on the look out for these days, and as you can see, it could have ended quite badly. The lesson there being that if he’d grasped the Lambert successfully, he wouldn’t have flown over the top of him.

In the heat of battle one can understand these things happening, but for the sake of player safety, referees are likely to keep a close eye on these type of challenges.

Taione had quite an eventful game, as he was also on the receiving end of a big hit by Quins’ Rob Buchanan. You can see that in the third video below.

The dangerous no-arms tackle that resulted in a yellow card for Taino (1:15 in the highlights)

The big tackle that Taino took from Rob Buchanan