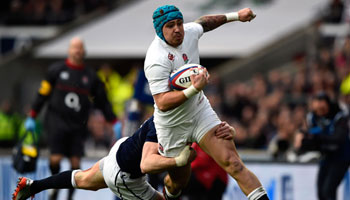 Scotland led at halftime in the Calcutta Cup clash at Twickenham but a late try and ten points from the boot of George Ford gave England a 25-13 victory, taking them top of the Six Nations table going into a final weekend that will go right down to the wire.

England’s win at home didn’t come about as easily as they would have liked, with Scotland making them work had for a victory that included two disallowed tries.

Jonathan Joseph scored early on with some neat footwork but that good start was cancelled out when Scotland’s Mark Bennett scored for the visitors. Geore Ford also crossed, before Jack Nowell’s late effort proved enough for victory, and sets things up nicely for next week.

With Wales’ win over Ireland, any one of the three sides can still win it in the final weekend of play. England’s advantage at the top is due to having a points difference of +37 over Ireland’s +33 and Wales’ +12. All three sides are on six points, so it’s all to play for in a week’s time.

Wales take on Italy in Rome first up, then Ireland against Scotland at Murrayfield, with England hosting France in the third game of the weekend, knowing exactly what they need to achieve for overall victory. If they can do that, it will be their first Championship title since 2011.

If Ireland beat Scotland and Wales notch up a big total against Italy, England will need to come up with a strong performance against a French side that will be plaing for pride, and would love nothing more than upsetting the English at Twickenham.