England too strong for Argentina in first Test in Salta 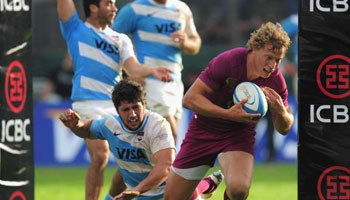 England scored four tries as they beat Argentina 32-3 in the first of their two Test series in Salta on Saturday. Three tries were scored in the first half, before debutant Billy Vunipola crossed in the final minute of the match.

With some key men on the Lions tour, England have a new look side but produced a strong first half performance, with David Strettle, Billy Twelvetrees and Ben Morgan all crossing for tries.

Argentina themselves had a fairly experimental side, which didn’t pay off as Freddie Burns kicked 12 points for the visitors, who led 25-3 at half time.

No England side has ever won a series 2-0 in Argentina, so going one-nil up a massive step towards achieving the feat that Bill Beaumont’s 1981 side last came closest to doing.

“If you’d said to me at the start of the day that we’d win by that scoreline, I’d have taken it,” said pleased coach Stuart Lancaster.

The two sides meet in Buenos Aires next weekend for the deciding game, where going by the first Test, England will probably be favourites to win.

“The goal at the start was to come away with two wins from two tests, which has not been done by England before, so, part two to come,” Lancaster added.