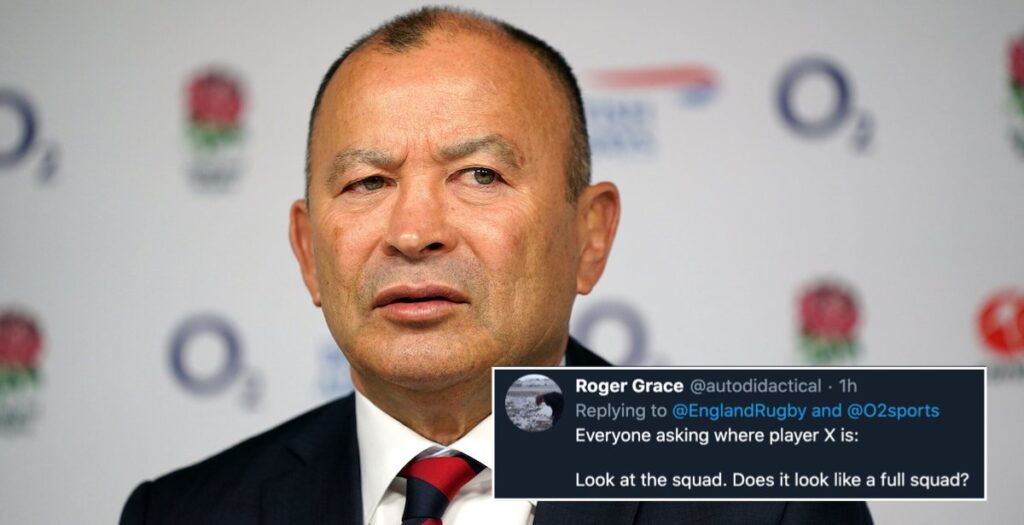 Fans and pundits have taken to social media to express their thoughts on the latest England training squad which includes no players from Sale, Exeter, Wasps, Bath or Bristol.

On Monday, October 5 head coach Eddie Jones announced his training squad for the upcoming games against the Barbarians, the final round of the Six Nations against Italy and the Autumn Nations Cup.

However due to the upcoming Premiership playoffs Jones has been unable to select players from the competing teams and due to the rise in Covid cases at Sale, five teams are unavailable for selection instead of four.

The other names left out were Worcester’s Ted Hill and Ollie Lawrence, who are both also unavailable due to the postponement of their game against Sale.

Among the players called up for international duty were 12 uncapped players including Alex Dombrandt, Saracens youngster Ali Crossdale and Gloucester’s Ollie Thorley.

“We have a three day camp this week and another one next week then we’re into the week of our Quilter Cup match against the Barbarians,” said Jones. “We’ll be slowly building up, working on the basics and working on team cohesion.

“We’re excited to be back together in camp representing England. This autumn we want to play for the fans and give them something to smile about.”

Following a trip to Rome to face Italy (31 October, KO 4.45pm GMT, live on ITV) in the final round of the delayed 2020 Six Nations, England will play four matches as part of the Autumn Nations Cup.

Worth pointing out that there are no players from Exeter, Wasps, Bristol, Bath & Sale (for obvious reasons) before anyone blows a gasket! 😂 https://t.co/0XNwL5eTHr

England coach Eddie Jones has included two South Africans in a 28-man squad for a three-day training camp ahead of a busy Test window.https://t.co/KBEBdU7k2z

So let me get this right…

Eddie Jones has picked a 22 year old winger who has played two full Prem games and come off the bench twice.

But not selected the 21 year old Hassell-Collins who is joint 8th top try scorer, from one of the weakest teams and played nearly every week. https://t.co/1Wu6Q6Jqpu

Let me check the 2 SA’n that Eddie Jones selected in his England squad. Wow!