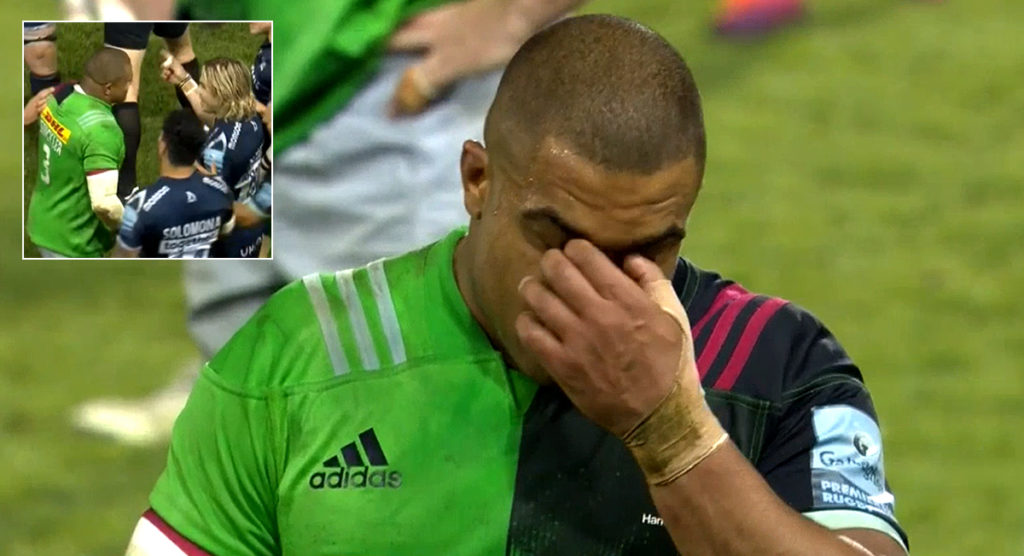 Harlequins prop Kyle Sinckler had a match he’d rather forget on Friday night, as his side went down 28-17 to Sale Sharks and not only did his pack struggle at scrum time, but he was also sin-binned for a fairly petulant attack on outstanding scrumhalf, Faf de Klerk.

The England prop had a number of indiscretions during the Six Nations and has shown that he has the ability to get wound up fairly easily.

We saw that at the AJ Bell stadium as frustration got the better of him eventually, after he had attempted to get the speedy South African number nine on more than one occassion.

Eventually, after De Klerk appeared to take a bit of a shot off the ball and complained to the touch judge, Sinckler decided to ‘slap the South African in the tummy’.

“It was a needless yellow card for Kyle. There’s nothing I can do today and during the game,” said Quins’ Paul Gustard.

“Kyle’s a British Lion, he’s an exceptional player and he’s a key player for us. Unfortunately, he gave away a couple of penalties but he’ll grow and get better for that. I’ve no issues with Kyle’s discipline but today he got a couple of things wrong. That’s what happens in rugby, people get things wrong and it’s unfortunate, and it’s cost us a bit today, but not specifically from Kyle’s incident.”

As a typical scrumhalf, De Klerk was quick to continue the cheek, pointing out to Sinckler that his slap was directly in front of referee Wayne Barnes. A yellow card followed.

Springbok De Klerk had earlier in the match brilliantly prevented Harlequins from going 14-0 up when he got underneath Danny Care to prevent a certain try (see below).