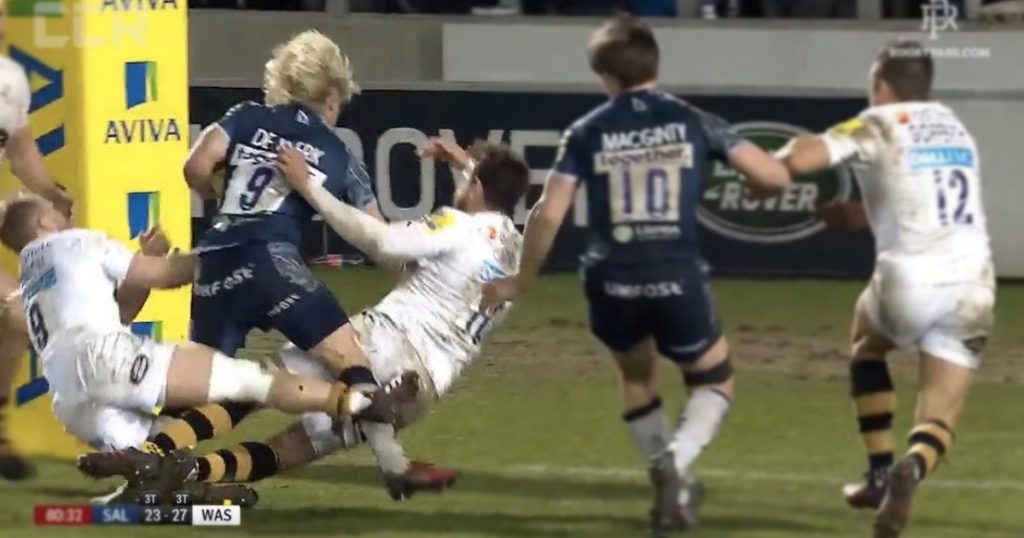 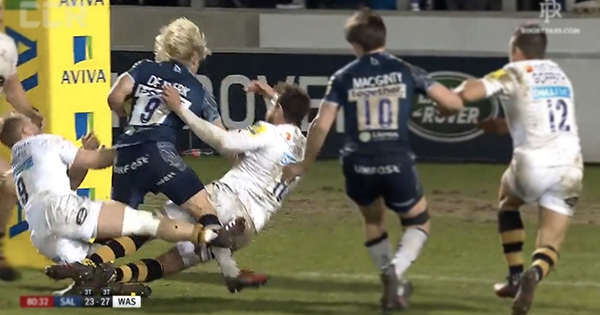 Sale Sharks pulled off an incredible last ditch win as they scored a try all of ten minutes into injury time to take them ahead of Wasps after a dramatic finale. Just before that , scrumhalf Faf de Klerk took it upon himself to attack the line.

And attack it he did, as the nuggety Springbok charged into halfbacks Dan Robson and Danny Cipriani, causing one of the most brutal looking collisions we’ve seen all season.

With De Klerk threatening so close to the tryline, both Robson and Cipriani went high, causing a Bok sandwich that the man in the middle came out the better of.

Cipriani was clearly knocked out cold, while Robson also left the field after a few minutes of attention. De Klerk himself got a shiner that kept getting bigger as the camera focussed on him up.

Cipriani has since given an update via twitter, reassuring fans that he is now okay.

I’m feeling fine. Thank you for the messages. I remember most of the game. Well done to Sale. Appreciate the concern ????????

Robson also said he was doing okay, despite feeling the knock the next day.

“Few sore teeth this morning, thankfully had my gum shield in. Will be back fighting to make up for last nights result. Thanks for all the messages and travelling support”

Wasps defended for all their worth at the AJ Bell, but in the 91st minute, Marland Yarde went over in the corner for the winning score, giving Sale Sharks a 28-27 victory.

What a win for Sale Sharks! They go wide ten minutes into injury time and Marland Yarde goes over in the corner. 28-27 vs Wasps.

Thoughts with @DannyCipriani87 after that awful knock ????

Watch the match highlights below