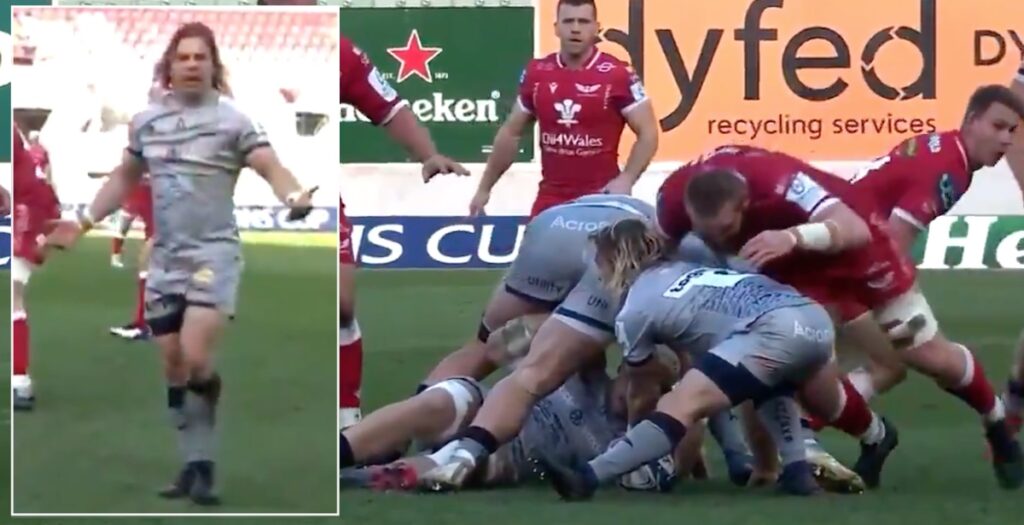 The South African scrum half was set to distribute the ball from the back of a ruck when Ball dived through the breakdown to take him out, virtually landing on top of the playmaker.

The collision appeared to make direct contact with the head of de Klerk and the scrum half appealed to the linesman in frustration that the incident wasn’t spotted by the referee.

How was this shot to the head of Faf de Klerk by Jake Ball not checked properly by the TMO and referee?! They said it was legal because the hand was on and the ball was out, how about the shoulder to head?! French officials hey….pic.twitter.com/GGx5Gu1bg2

The challenge wasn’t reviewed by the TMO which has led fans and pundits to question the severity of the tackle on social media.

Such a cheap shot from Jake Ball on Faf de Klerk. #SCAvSAL

So @fafdeklerk has just been absolutley melted in the head by Jake ball. Apparently been checked by tmo and nothing has come from it??? What is the rule? Can you make contact with the head or not? #concistencyiskey

Shoulder to the head on Faf de Klerk overlooked by the officials and Scarlets have a scrum on the Sale 22.#SCAvSAL

What Jake Ball did to @fafdeklerk was nothing short of a red. If faf had done that. The press would gone mental dirty South African. Faf still has a world cup he doesn’t. #SCAvSAL #HeinekenChampionsCup #btsport