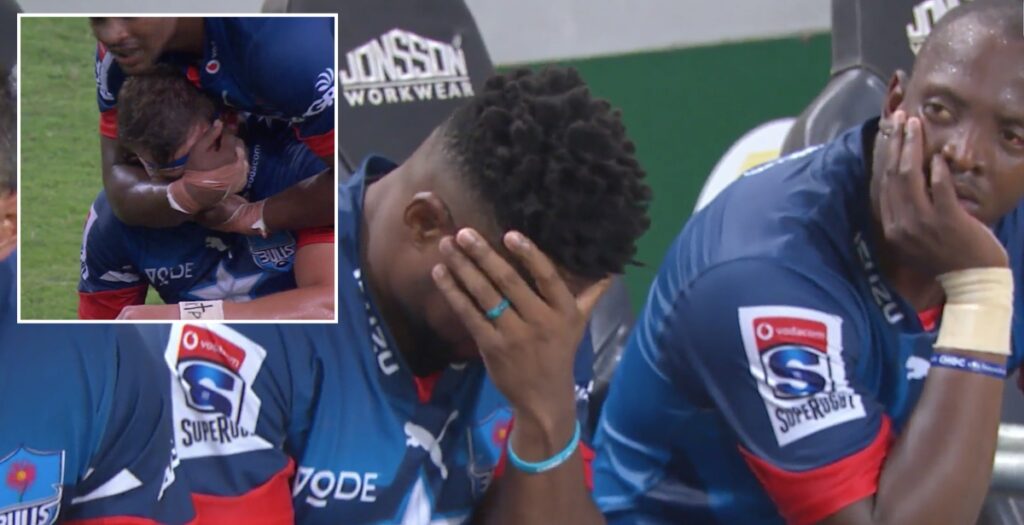 Bulls centre Johnny Kotze received a ball to the face from close range after his teammate Warrick Gelant attempted to clear the ball from a restart.

The ball ricocheted off Kotze’s face and cleared into touch with just over three minutes left on the clock between the Sharks and Bulls at Jonsson Kings Park in the opening round of Super Rugby 2020.

Of course members of the crowd and commentary found the funny side of the situation while Gelant apologetically embraced Kotze as he took a knelt in pain. The South African centre certainly wasn’t laughing as he kneeled in frustration at not only being hit in he face by his own teammate, but for trailing by a point in the dying minutes of the game.

The Sharks went on to win 23-15 after replacement scrum half Sanele Nohamba went over in the 70th minute. All 15 points scored by the Bulls were scored by veteran Springbok fly half Morné Steyn, who converted four penalty kicks and a drop goal.

Kotze, 27, has made more than 70 Super Rugby appearances for Western Province, Stormers and the Bulls and he spent some of the 2018-19 season on loan at Ospreys, where he made four appearances.