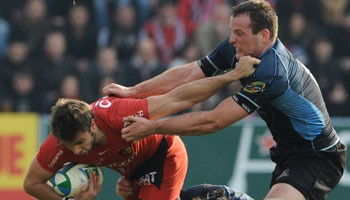 Glasgow Warriors achieved a famous victory in the Heineken Cup on the weekend as they took on French champions Toulouse in their own back yard. Winning 33-26, they shocked the home crowd and gained respect across the rugby world.

Having not been beaten at Stade Ernest Wallon in two years and 15 matches, and with a quarter final in their sights, Toulouse were the odds on favourites.

Glasgow were playing for nothing more than self-respect and the possibility of improving their seeding in future events. This was a true underdog story, and one that gives hope to those sides and players out there who lack the self belief to pull off the unimaginable.

They came out firing with a sense of pride and passion rarely seen by the side that has struggled to achieve in the past. The final score is somewhat deceiving, as the visitors had a comfortable points cushion throughout.

When Dan Parks kicked his first penalty, the crowd cheered, almost sympathetically. The reality of what was happening soon hit home though as the visitors scored two quick tries, and controlled the match right up until the last few minutes, when the French champions dramatically came back with a penalty try and a score from Vincent Clerc.

Fourteen points of the lead was wiped away in two attacks. For a moment it looked as though the games greatest comeback could outdo one of its greatest shocks. But it was not to be, as Toulouses only consolation was the late penalty that gave them a losing bonus point.

So it was victory for Glasgow, delighting coach Sean Lineen.

“It makes you very proud of what the team did, very humble.

“We’ve not been basking in the glow, but it’s always good now and then to stop and have a little look at what you’ve done. When you do something special you’ve got to be allowed to enjoy it.”