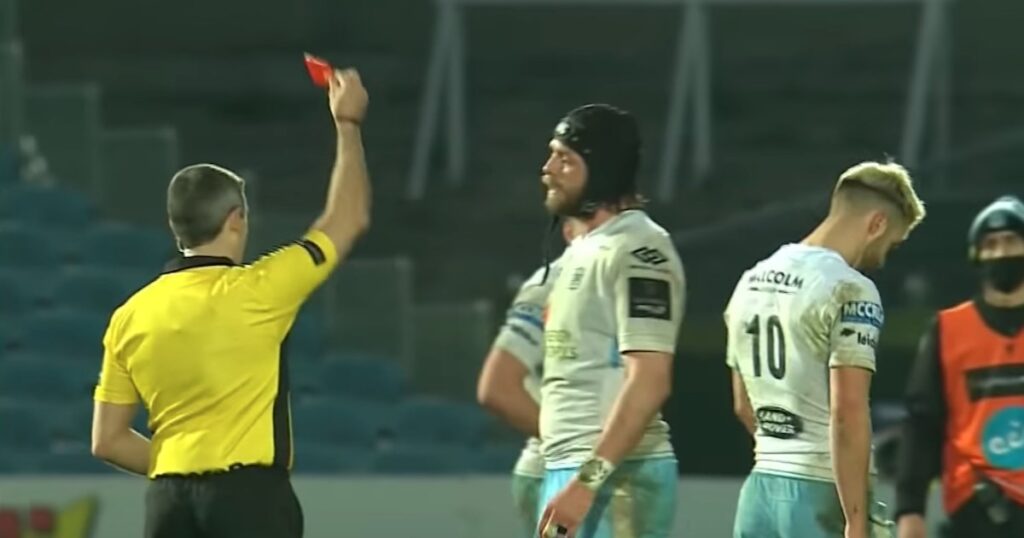 Glasgow Warriors and Scotland fly-half Adam Hastings was sent off during his side’s 40-21 Pro14 defeat away to Leinster in Dublin, after accidentally striking Cian Kelleher in the face.

The incident happened towards the end of the first half as Hastings gathered an up-and-under at the halfway line.

Unfortunately for Hastings, however, the out-half stuck his leg out as he jumped for the ball and could not avoid collecting the Leinster winger Kelleher in the face.

Referee Frank Murphy had no other option after consulting with his Television Match Official (TMO) Olly Hodges to give Hastings his marching orders.

Glasgow had been trailing 21-7 at the time following three tries from the hosts and eventually went down 40-21 by the end.

The incident was very similar to that from Wasps winger Paolo Odogwu, who was also sent off for a boot to the face while taking the ball in the air.

Odogwu was handed a six-ban as a result of this incident, which was described at the time as a reckless movement in the air, despite intent not being present.

“The panel found that while he did not intentionally aim to make contact with the Sale player’s face, he did intend to use his outstretched leg to fend off a potential oncoming player and was reckless as to whether or not it made contact or caused injury. In this case the dangerous action of the player resulted in a minor injury to the Sale player.

Hastings will undoubtedly face a ban of some sorts, and a similar six-week suspension is a likely punishment. For Hastings, who has recently re-entered the Glasgow fold after being ruled out of the back end of 2020 due to an injury sustained in October, he risks missing out on any further part in Scotland’s current 6 Nations campaign.

The incident takes place 49 seconds into the highlights video below: