Fan attempts tackle on player, knocks himself out 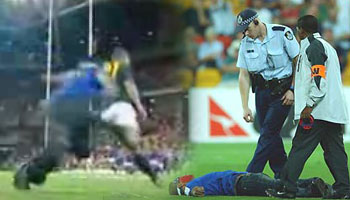 In the 2003 World Cup match between South Africa & Samoa, replacement half-back Neil de Kock scores the Boks’ eighth try in the corner to end the match, but not quite.

As Louis Koen attempts to take the conversion, this drunk madman runs onto the field and tries to tackle him. Koen doesn’t break stride though, and still manages to convert the kick, despite Sydney resident Tapumanaia Lautasi knocking himself out on what looks like could only be his hip.

Lautasi apologised to the court and claimed he didn’t remember the incident, blaming it on the 8 beers he had consumed during the match. He was fined $1,200 for his actions.

Just sit back and enjoy these 60 seconds of stupidity.