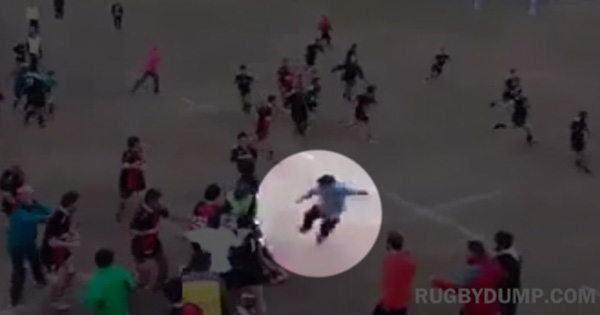 These chaotic scenes took place in Argentina recently as a match between Huazihul San Juan Rugby Club and Personal Bank Mendoza ended in violence, with supporters from both sides getting involved, resulting in two players being hospitalised.

The match was important for the qualification to the next phase of the Cuyano regional tournament, so tensions were clearly high throughout, finally boiling over at the final whistle.

A statement was issued condeming the events, calling them “abhorrent, cowardly and shameful acts of violence”. They were also investigating the evidence to determine the cause.

The quality of the footage isn’t great but you can see the level of mayhem, which included a kick to the head – in case you were wondering why the big guy is laying on the floor at the end – and a flying kick from someone who chose to get involved.

Huazihul decided to suspend their captain, and their president issued the following statement:

“While this is a contact sport, no excuse is valid to justify the shameful acts that occurred in yesterday between the teams. Our institution has 89 years of history, is a founding club rugby in Cuyo and has always trumpeted the core values that make this sport unlike any other.

“Principles such as respect, companionship, solidarity, should not form hollow words, should rise as standards, especially in modern times where so much misery and indifference is observed.”

“There are no words to express the sorrow that invades us as a club at this time,” the statement, roughly translated from Spanish, continued.

“We note that these events will be investigated in depth and evaluated by the Committee of Honor of our institution, which will be cited alleged perpetrators, heard and the necessary measures are taken to eradicate these anti-social and unsportsmanlike conduct promoted by misfits who do not understand the pure nature of the sport and we consider alien to it.

“Through this and on behalf of all Huazihul San Juan Rugby Club, we raise our sincere apologies to all this great family that makes up our beloved sport.”

We’ve seen a few ugly incidents of late, with a player kicking another in the head, similar events to this one in France, as well a fight between the British & French navies. See those below