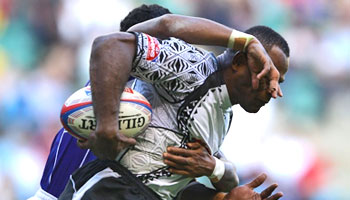 Fiji took the London Sevens title in convincing style as they beat rivals Samoa 38-15 in the Cup final on Sunday, but it was New Zealand who captured the overall series title, their 10th in 13th years. Below are highlights from both day’s play at Twickenham.

New Zealand’s 36-0 demolition of South Africa in the quarter-finals was enough to clinch them the overall title, so when they lost 37-7 to Fiji in the semi-finals, it didn’t bother them too much. They ended top of the table and as you can see below, finishing just marginally ahead of Fiji.

“It’s pretty special, we worked extremely hard to get this one and I think everyone knows how competitive the Sevens Series is now. We came here with an 11-point lead but still with an opportunity of blowing it,” said New Zealand’s inspirational captain, DJ Forbes

“The quarter-final win was probably our only complete game of rugby this weekend, but there was a lot of passion, a lot behind it to make sure we wrapped up the series. At the end of the day it comes down to consistency and that’s where we were probably a little bit ahead, but taking nothing away from Fiji, they’ve done extremely well to win here,” he added.

Fiji captain Setefano Cakau said his team were delighted with the result, and had excelled all season, achieving the goals they set out. “We came from fifth last season to second which is a big improvement for us,” he said.

Australia beat England 14-12 in the Plate final, Wales won the Bowl final, and France beat the USA to win the Shield final. Below are official highlights from Saturday and Sunday, including the final.