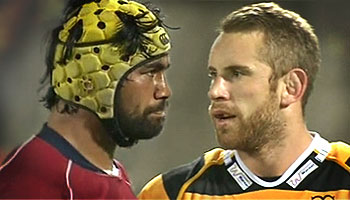 The Log o’ Wood was up for grabs on Saturday as Taranaki set out to defend the Ranfurly Shield from a determined Tasman outfit. The game was highly entertaining with many tries and a huge hit that sparked a duel between two hard men of the game.

Taranaki had an impressive start to the ITM Cup season with a good win over Bay of Plenty in round one. Tasman also started well though, so this match was always going to be a fiery contest.

The tone was set with 20 seconds on the clock as Taranaki crossed for a try following a break from dynamic young number ten Beauden Barrett. After four minutes, it was 7-7.

With just over ten minutes left in the first half, things heated up as Samoan veteran Filipo Levi put in a huge hit on Jarrad Hoeata as he looked to get the ball away. Hoeata, never afraid of mixing it up, appeared to shrug it off but just a minute later he was involved in a scuffle.

Shortly after that, Levi carried the ball and Hoeata was perfectly placed to have a go at him, which he did, resulting in a penalty for Tasmas for the high shot.

It was a nice little duel that, as mentioned by the commentators, was thoroughly enjoyed by both parties, who over the years have never backed down from the physical stuff. Overall you’d think Levi would have got the points decision, but Hoeata, who himself often plays lock, took the hit well.

The rapid try scoring continued throughout, as the game produced ten tries and ended 49-40 to Taranaki, despite a valiant effort by the visitors. Taranaki retain the Ranfurly Shield.