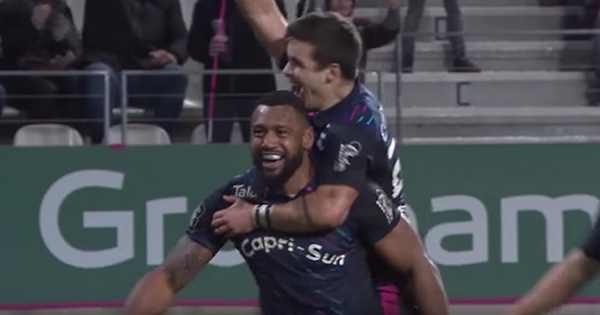 Round 14 of France’s top domestic competition is in the books, so here’s a look at five of the best tries from the latest action, including some scorchers and a top try in particular scored by a man who started his career in 1999.

Winger Jeremy Sinzelle gets things started with his score in the corner in La Rochelle’s 47-6 demolition of Agen. The win keeps La Rochelle at the top spot in the Top 14 table.

Next up, Brive’s Nadir Megdoud scored off the back of several hard-earned phases and metres. The attack was held up briefly, just shy of the try line. Then fly half Mathieu Ugalde slipped a nice no-look pass under the nose of former Springbok hooker Bismarck Du Plessis.

Stade Francais’ Jonathan Danty finished off a nice dash and offload from fullback Tony Ensor. Then later in the match, teammate Waisea Nayacalevu busted through the Bordeux line and closed the door for their 22-12 victory.

Perhaps the best of the bunch belonged to 37-year-old (!!) Clermont centre Aurelien Rougerie, with his 40-metre dash and nice bump off just inside of five metres for the score.

Unfortunately for Rougerie and Clermont, the try came in a losing effort to Castres, who remain third on the table after their 31-27 victory.