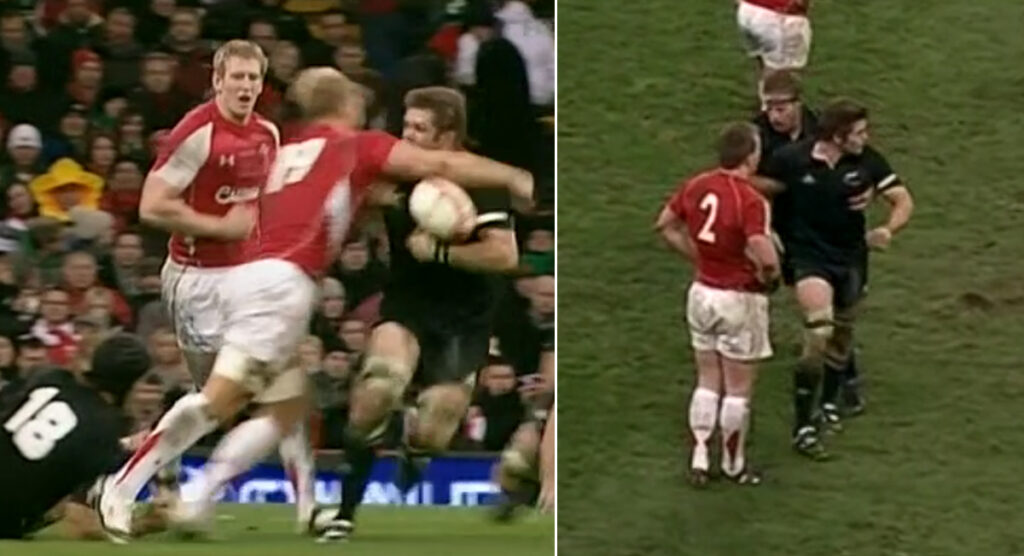 The game of rugby, and its laws around safety, have changed a fair bit over the years. Nowadays, players can be carded and suspended for incidents that at times seem fairly innocuous. On this occasion though, it was pretty clear cut.

Andy Powell was lucky to escape with just a penalty when Wales hosted the All Blacks in Cardiff in November 2010.

Richie McCaw was named IRB (World Rugby) Player of the Year shortly after this match, but just two minutes from time, he received a nasty hit from the big Welsh replacement number eight.

Powell made heavy contact with McCaw’s jaw with what seemed to be a blatant swinging arm, but miraculously, referee Alan Lewis and his officials completely missed it.

McCaw was clearly unamused, and a little shaken, while Powell seemed to indicate that it was chest height. The New Zealand commentary crew were anything but pleased, ripping into Powell and also bringing up an incident a year prior that involved Dan Carter.

Carter’s tackle against Wales was arguably far less malicious, but he was treated like a criminal, booed by the fans at the Millennium Stadium and vilified in the press afterwards. He was suspended for a week for that one.

While Powell dodged a bullett, McCaw got up, gathered his bearings and saw out the game, completing another Grand Slam win for New Zealand’s end of year tour.