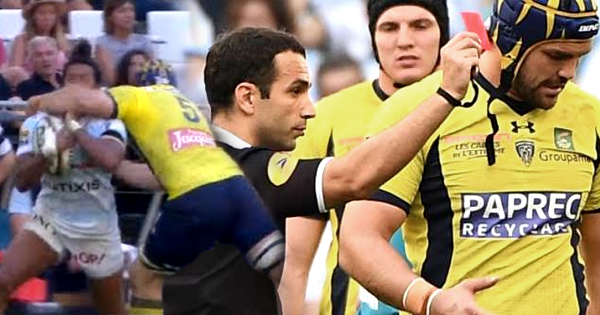 Clermont Auvergne made it through to the final of the Top 14 last weekend after an impressive 37-31 victory over defending champions Racing 92 in Marseille.

They scored four tries – including two from Camille Lopez – to Racing’s three during the match, but what was perhaps more impressive, was that Clermont spent the majority of the second half a man down after second-row Flip van der Merwe was sent off.

Referee Mathieu Raynal had no other choice but to brandish the red card at a time when Clermont led 19-6.

The sizeable lead Clermont had when van der Merwe was dismissed probably helped Olivier Azam’s side not only hang on to but extend their advantage. Lopez’s second and a final try from Fritz Lee, as well as a further eight points from the boot of Morgan Parra, sealed the win.

Van Der Merwe is suspended pending a disciplinary hearing, which will take place on 7 June, when he will join Pierre Aguillon in front of the LNR (La Ligue Nationale de Rugby).