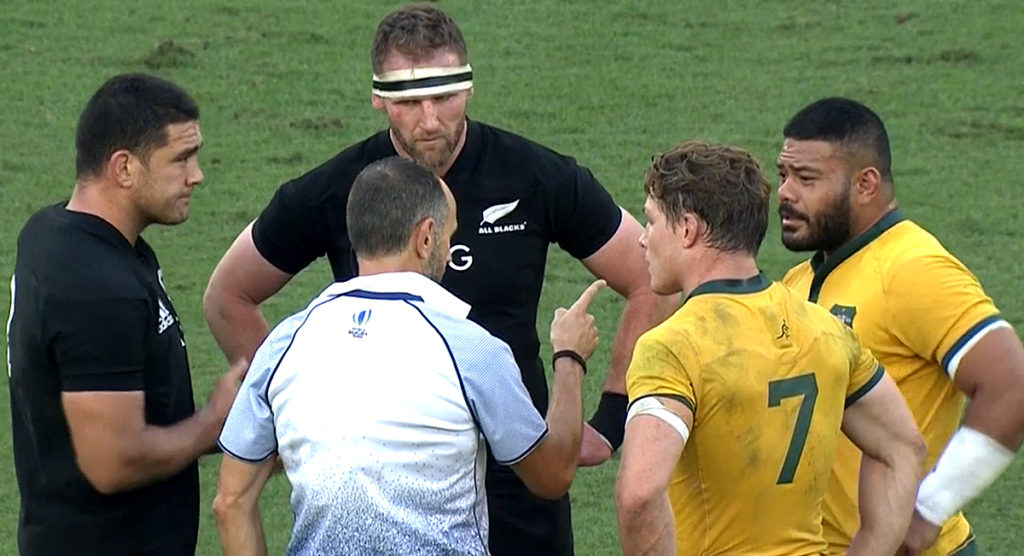 Wallabies hooker Tolu Latu’s sin-bin for retaliation against the All Blacks on Saturday rubbed a lot of Australian fans the wrong way, including former player Phil Kearns. However, footage shows that while it appeared to most that Codie Taylor provoked it, Latu actually started it.

The incident occurred at a fairly crucial time in the Yokohama Bledisloe Cup Test, snubbing out a Wallabies comeback as they eventually went on to lose 37-20.

Kearns felt that Latu was baited into it by Taylor, and Poite ignored that.

“That yellow card, I’ve got to say, I’m consistently frustrated — and I know world rugby is, the other teams except New Zealand — frustrated with the free ride New Zealand get from referees globally,” Kearns said on Fox Sports post-match.

“Disappointing from Tolu. Yes, sure, he shouldn’t have done it but really, referees, get a grip, nothing happened, no-one was hurt, no-one was punched.

“It was just a little push and the other bloke pushed him first. I mean that whole thing just doesn’t make any sense. Just get on with the game and that was part of my frustration, with the All Blacks getting a free ride. Get both of them off.”

As can be seen here, it was actually Latu that put his hand in Taylor’s face first, leading to the reaction from the All Black hooker.

Replays at the time did not show the first shove as the scrum broke up, leading to misinformed reactions from coaches and media alike.

All Blacks coach Steve Hansen said that the yellow card might have been a bit harsh, but said: “You are not allowed to strike someone in the face so it was pretty dumb wasn’t it. And if you do dumb things you get dumb reactions.

“The referee had no other option by the law and if he hadn’t done it he would have been chewed up by his bosses. He’s just done what the law says he should do and given the guy 10 minutes.  I think the young hooker has overreacted to something and to be honest Codie did, too but he didn’t hit him in the head. He pushed him on the shoulder. It was a whole lot of nothing really.”

“You shouldn’t do it because if they push us and he pushes back then he should know it is going to come back on us. That is just the nature of where we are at the moment,” said Wallabies coach Michael Cheika.

“He shouldn’t do it but at the same time as a footballer you don’t want to be pushed. I don’t think the referee was going to do anything about it when he kept coming towards him.

“I understand he wants to look after himself and stand up for himself that is part of the game.. but not in that manner.”

Wallabies prop Sekope Kepu said that he’s since had a word with 25-year-old hooker Latu.

“I’ve had a word to him but you can’t get too bogged down in it, it’s a spur of moment thing,” Kepu said. “You come up from the scrum, you’re pinged, there are words and stuff gets exchanged in those moments. On a bigger picture we can’t let that happen, we’ve got to tidy that stuff up. It didn’t cost us the game but it did put a little bit more pressure on us.”

“Tolu is obviously disappointed in himself but I’m sure he’s going to learn from it.”

The Wallabies have a training camp in Japan before they head to Europe for their end of year tour. Their first match is against Wales in Cardiff, followed by Tests against Italy and England.

New Zealand meanwhile will have a team stay behind in Japan, where they will take on the Rugby World Cup 2019 hosts next weekend.