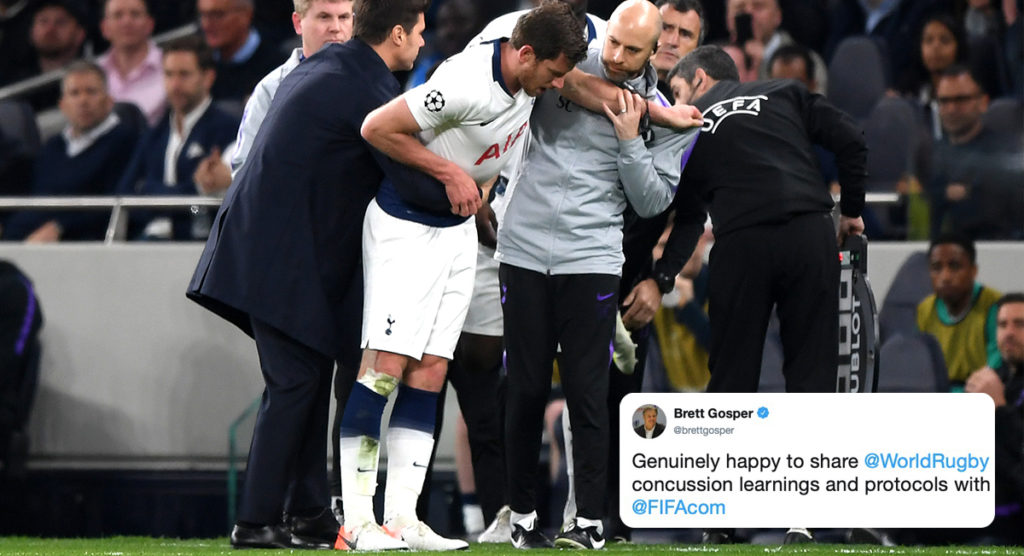 Rugby is leading the way in terms of concussion protocols according to fans, after distressing scenes in yesterday’s Champions League football.

After receiving a blow to the face, Tottenham’s Jan Vertonghen received treatment and was clearly struggling. However, he was about to play on before vomiting and almost fainting, forcing Tottenham to make the substitution.

Since then, this has raised many concerns from fans, highlighting rugby’s Head Injury Assessment protocol as the example in modern sport of how these matters should be addressed.

As a result, CEO of World Rugby Brett Gosper has tweeted saying he is “happy to share” with FIFA the “learnings and protocols” surrounding concussions.

This injury has flagged where football may be lagging behind other sports with regards to player welfare, and there has been a myriad of fans taking to Twitter suggesting rugby’s HIA assessment becomes used in football, whereby a potentially injured player can be temporarily replaced as they undergo tests.

Vertonghen just went from bad to really bad in real time. Looks like a concussion. pic.twitter.com/xkS9SziEsU

Football needs to take a good look at how Rugby is run. How Vertonghen was even at the stage of getting back on that pitch is beyond me. Poor from Tottenham medical staff imo.

If Vertonghen played rugby and had been allowed to continue, his club would have been castigated. HIAs must be brought in to football.

Concussions and player welfare have been some of the main priorities of World Rugby’s over the past few years, as they seek to crack down on the alarming number of players that either retired due to concussion symptoms or missed huge segments of their career.

It is a problem that is widespread in both codes of rugby, with some of its biggest stars such as Johnny Sexton and Leigh Halfpenny battling with concussions throughout their careers so far.

Really well you could of fooled me. Vertonghen should have never been allowed to get anywhere near that pitch after such a coming together of heads. Again football could learn a lot from rugby re head injuries.

Former Springboks and Racing 92 star Pat Lambie was another high-profile player to end his career prematurely this season due to head injuries, which propelled the topic into the spotlight once again. World Rugby have continued to make law changes to make the game safer as a consequence.

Of course, head injuries like the one seen in yesterday’s football are not as common as those seen in rugby, but it nonetheless does not mean that there should not be measures in place for the next time it happens, and football can learn a lot from rugby.

Watch KNOCKED below, a documentary exploring the realities of concussion issues in rugby