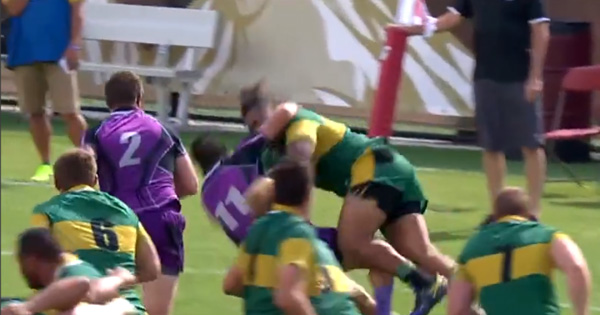 On Sunday, the Sacramento Express and the Denver Stampede met in week 14 of the inaugural season for Pro Rugby USA. In the second half we saw this encounter between an up and coming wreckingball, and an experienced former League star.

Sacramento was awarded a scrum with roughly 20 minutes remaining. After getting a pretty decent shove, the ball cycled to Express number 8, Langilangi Haupeakui, who in recent weeks has put in some top performances.

All that stood between him and another barnstorming run was opposing winger and former League star and Wallaby, Timana Tahu, now 35-years-old.

What happened next was a bit of a blur until you see the slower replay. Haupeakui charged at Tahu but suddenly he was on his back, feet facing in the direction he was running.

Upon further review, Tahu grabbed high and around the neck to deliver a throw that would make any judo instructor proud.

Sometimes when you’re giving up 20 kg to someone with a full head of steam, you get him to the ground by any means necessary. Albeit in this case, in a dangerous and illegal way. Ever the crafty veteran, Tahu tops it off with a perplexed look of innocence.

Tahu was penalised, and spoken to by the referee, who gave him a warning for the high tackle.

As we saw a few weeks ago, Langilangi has been making a name for himself with some serious size and speed. He was slow to get up but thankfully appeared to be none the worse for wear.

Denver would go on to win the match 59-13. View a short clip of the tackle below. Your thoughts?