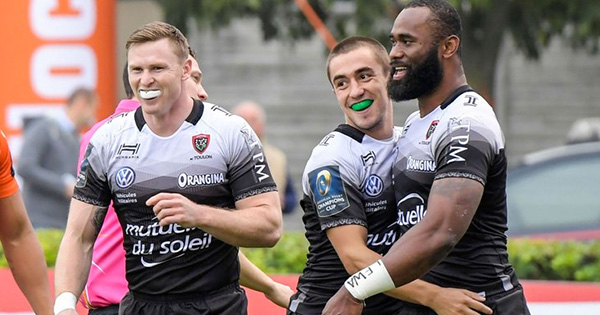 Playing in only his third match for Top 14 powerhouse Toulon, recent League convert Semi Radradra had a match to remember, scoring on his first touch and then impressively fending off two defenders later in the match.

Fijian Radradra started in rugby union, playing for the U20s side in the 2011 Junior World Championship, which led to a senior call up for the Fiji Sevens team. He was then scouted and forged a successful career in the NRL, scoring 82 tries for the Eels.

A move to France and Toulon followed this year, as he left rugby league on a high, with 22 tries in just 26 appearances in his final season.

The new chapter couldn’t have started better for the 25-year-old, as he scored Toulon’s first try in the opening minute of their Champions Cup match against Benetton Treviso, and it didn’t disappoint.

Looking quite at home with his new side, Radradra was able to showcase his renowned pace as he burst through the Treviso defensive line from inside his own half, dashing in for the score.

He continued to impress in the second half with a streaking run down the sideline, fending off both fullback Jayden Hayward and winger Angelo Esposito in brutal succession.

Treviso, however, didn’t go quietly and held a slim lead in the dramatic closing minutes thanks to the boot of Ian McKinley. But it wasn’t to be, as Francois Trinh-Duc connected on a last-minute penalty and Toulon escaped with the win 30-29.