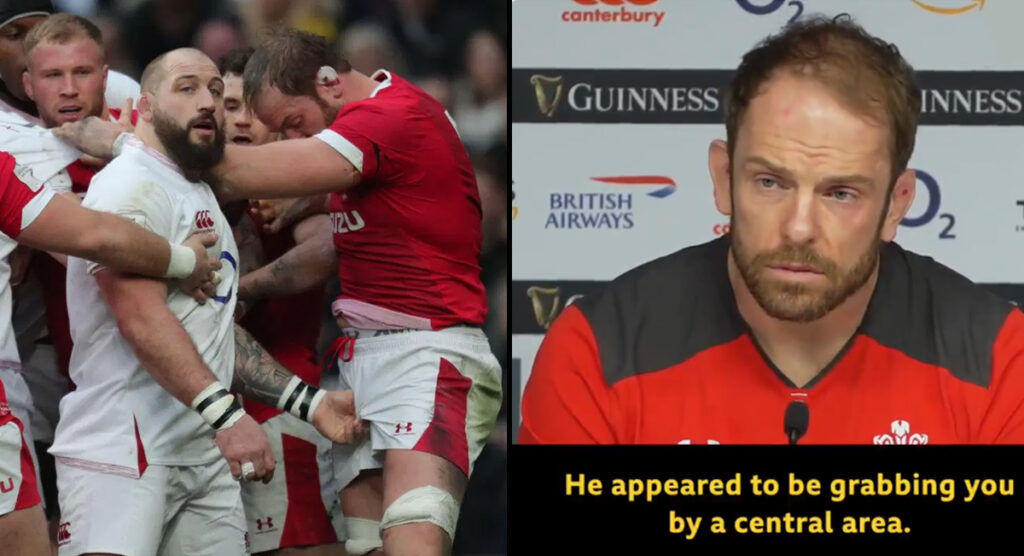 Barely a rugby match can go by these days without some form of controversy that is open for discussion afterwards. Joe Marler’s latest misdeed seems different though, and one that may not die down quickly.

England’s loosehead prop grabbed Wales captain Alun Wyn Jones’ genitals in the first half of their contest on Saturday, an offence that carries a minimum of a 12-week suspension under World Rugby Law 9.27.

It seems you’ve forgotten what you actually did.
You assaulted someone, here’s a reminder. pic.twitter.com/ItEae9gEbJ

Like so many incidents on social media, people have separated into two groups on this occasion: those that are ardently in support of Marler, and those that are not.

Two former England players, Will Carling and Andy Goode, have both succinctly summarised both arguments in reaction to this.

The former flyhalf Goode has suggested whether this incident would have received the same reaction in a workplace, particularly noting Gareth Thomas’ jocular reaction to it, something he has since apologised for.

Goode also said on Twitter that “people think it’s funny but the values our game has been built around aren’t in great shape at the minute”.

Imagine if someone touched another man or woman up in the workplace and then someone joked about it on TV. People have admiration for Gareth Thomas with what he’s been through and opened up about but I wonder if something similar was done in a homophobic way he’d joke about it?

People think it’s funny but the values our game has been built around aren’t in great shape at the minute! pic.twitter.com/eBx5WxAwm1

Conversely, the former England captain Carling has said that perspective is needed in this situation. He further added: “Surely by just watching the footage we can all see it was not aggressive, did not cause pain. So jumping to all these ludicrous assumptions is just total overreaction to what was intended to be a humorous wind up.”

Think perspective is needed on @JoeMarler ‘incident’. Surely by just watching the footage we can all see it was not aggressive, did not cause pain. So jumping to all these ludicrous assumptions is just total over-reaction to what was intended to be a humorous wind up.

It is the fact that there was no aggression in Marler’s antics at Twickenham that has made this a complex matter, as it was an attempt to wind up the Wales captain rather than assault him. While the reaction has been fairly binary, this is a much more nebulous matter, which is unprecedented.

The prop has been cited, and will face a disciplinary hearing on Thursday in Dublin, and regardless of the outcome, there will be a significant reaction from one side of this debate.

This is what Wyn Jones himself had to say about it: