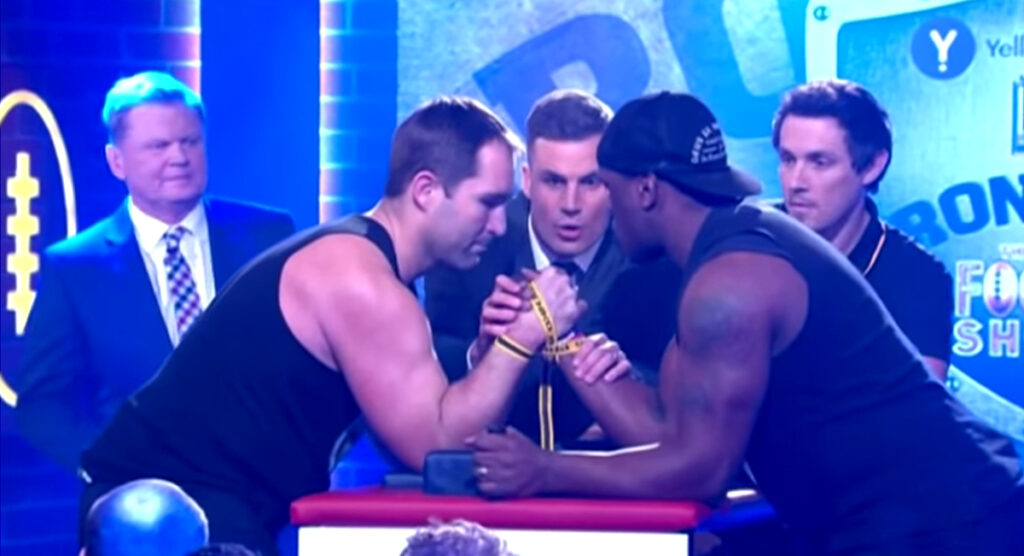 Former Wallabies winger Wendell Sailor has broken the arm of fellow former NRL player, Ben Ross, on live TV during the rugby league show, The Footy Show. It took place as part of the Iron Arm Challenge, an arm wrestling challenge that was set up for charity.

Beau Ryan, funny man and former player himself, was on hand to call the event, but was clearly shocked at what happened, as Ross appeared to have his elbow dislocated, or possibly ripped the bicep off the bone. It only just happened, so details are scarce at this stage.

Now 40-years-old, Sailor switched from Rugby League to Union and went on to play 37 Tests for the Wallabies before making his return to the NRL in 2007.

“Ben Ross is going to be OK, thankfully,” he said. “Just a freak accident nobody could have predicted. Hope he’s better ASAP.”

Ross was taken to hospital immediately, and the Nine Network cut to an ad break.

It’s safe to say that Sailor was the winner. We wish Ross all the best with his recovery.

Since it happened, Sailor has spoken about what went through his mind at the time.

“After he got the start on me, I’ve pushed back. And as I’ve pushed I saw him use his bodyweight a little bit, which you do anyway, to try and stop me coming back to that point,” Sailor explained.

“At that stage, that sound, the look on his face, what just happened. It was just gut-wrenching. I thought he might have pulled a biceps muscle. But just to see his arm hanging there, I felt so helpless. I didn’t know whether to pick him up or what to do. There’s so many emotions running through your head.