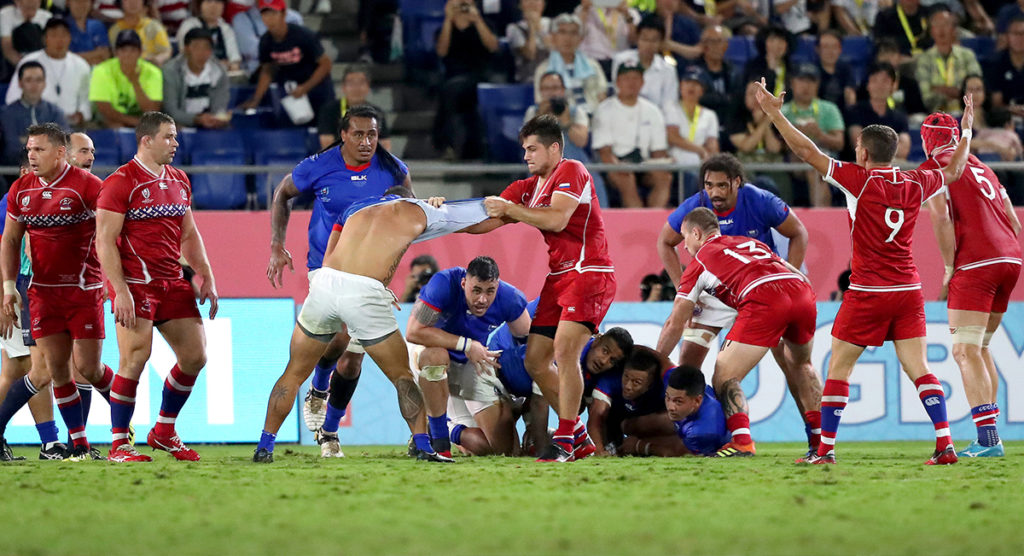 Samoa had a far more challenging contest than they expected as Russia turned up and fought valiantly, managing to lead 6-5 at halftime, before going down 34-9 in the end. Foul play was again a topic of conversation though, after two dubious calls in the first half.

Just hours after World Rugby released a statement on the standard of referring at the tournament, referee Romain Poite caused more controversy by awarding Samoa two yellow cards for two tackles against Russia that have been unanimously deemed red cards by pundits and fans.

Outside centre Rey Lee-Lo was on the verge of being awarded a red card for a tackle to the head of Russia’s fullback Vasily Artemyev. However, the television match official downgraded it to a yellow card, because the offence was mitigated by the fullback dipping into the tackle.

Love Samoa and our intent but that’s very lucky not to be red.

Only a matter of minutes later, hooker Motu Matu’u saw a yellow card as well for a hit at the ruck which was worse than Lee-Lo’s. Once again, the player that was hit was deemed to have dipped, although that is much more controversial as the player had already dipped as Matu’u was running to hit him.

Two minutes later and Samoa put in another high hit, that is only deemed a yellow card because Poite says the carrier is “dipping”.#RUSvSAM pic.twitter.com/ws4BSPkilF

Matu’u actually looked like he had knocked himself out with the challenge.

The game seemed to become farcical at this point, and fans online were outraged that there was not at least one red card from those two challenges.

Although Poite was set to award a red card for the first tackle, the excuse that the players may have been dipping does not seem to be acceptable.

This would have always been controversial given how bad the tackles were, but the timing is almost risible, as this was the first game after World Rugby’s statement, and it will only draw more attention to the officials.

Samoa ran out winners 34-9 in the end, but it could have been a completely different story had they been down to thirteen men for at least a whole half.

The officiating has been one of the key topics of the RWC so far, and this game will only add fuel to the fire.

Regardless, Samoa picked up the bonus point win and will be looking for a better performance when they faced Scotland next.

Russia will have to take on Ireland, who are fresh from a convincing win over Scotland on Sunday.

Is that a head-butt? Citing commissioner might be getting involved in this one. 3rd potential red card offence from Samoa. #RUSvSAM pic.twitter.com/b6UIm8fU97