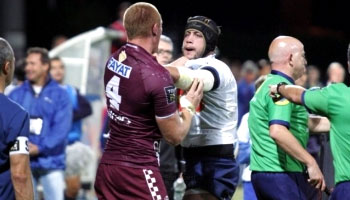 We’ve seen a few dust-ups of late, with two Western Province players shown straight red cards, while Luke Charteris and Pascal Pape were given yellows in the Top 14. This past weekend Agen and Bordeaux-Bengles were involved in a messy scrap too.

Philippe Sella’s Agen won their third consecutive match as they beat Bordeaux 19-15, with the only try of the game scored by Welshman Jamie Robinson. The visitors picked up a losing bonus point, but discipline was an issue and with a few minutes left the tight nature of the contest led to tempers fraying, and punches being thrown.

It didn’t stop there as the scuffle broke off into three seperate fights and with the maroon colour of the Bordeaux kit, it looked a bit like an old school State of Origin battle at times.

The chaos started in the front row but soon locks Esteban Lozada and Cameron Treloar paired off for their own one-on-one. Fatigue – rather than the referee’s whistle – eventually put an end to it as both players appeared be to spent, particularly Lozada after having thrown more than a fair share.

When order was restored, the referee chose to send four players from the field, with yellow cards for Hikairo Forbes and Jalil Narjissi as they were in the middle of the inital melee, and red cards for Lozada and Treloar, for continuing to throw punches.

Both red carded players have been summoned to a disciplinary hearing with the Ligue Nationale de Rugby. They are suspended until that takes place on 17 October.