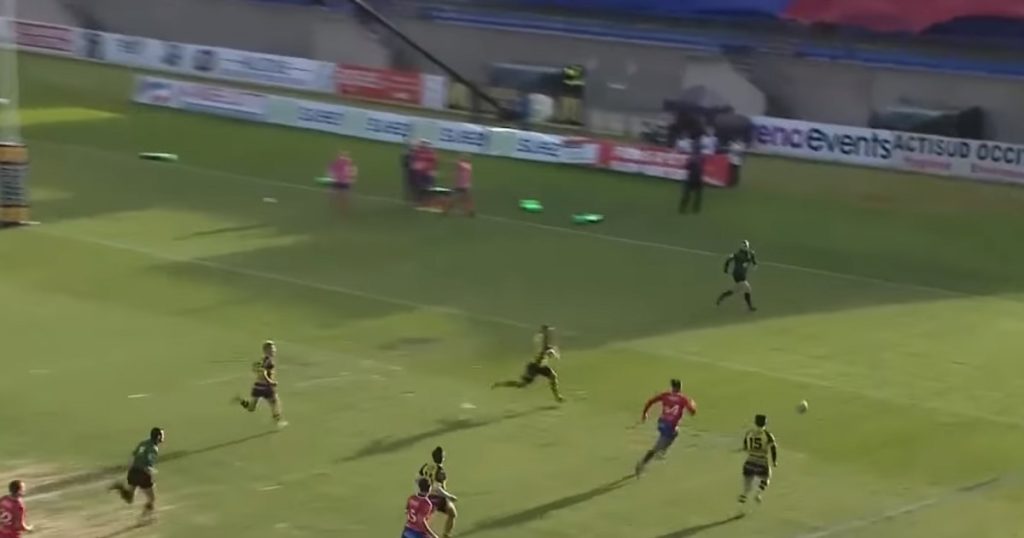 When you think of free-flowing, “French Flair” rugby, it’s fair to say that most people associate this with the Top 14, rather than the second tier ProD2 competition. But last weekend, there was a spectacular display of rugby which produced some sensational tries.

Across the board, there were fantastic efforts as Bayonne jumped ahead of long-time leaders Nevers at the top of the standings courtesy of their 21-16 victory over Montauban at the Stade Jean Dauger.

One of the tries of the weekend came from AS Béziers Hérault’s Wesley Douglas, who finished off an incredible counter-attack from a stolen line-out. The home side made the most of a splintered Caracassone defence, clearly on the back foot following their loss of possession, to put the ball through the hands of the backline, with Douglas chipping ahead and re-gathering his own kick to score.

Things got worse for Caracassone, who not only lost the match but also had one of their players, José Lima, handed a one-year back-dated suspension for a doping infringement.

A statement from the club regarding the former Portuguese internationalist said: “The sanction is severe […] USC will do everything in its power to help José Lima to bounce back from this difficult period in the year to come.”

No further information was provided regarding the substance Lima tested positive for.

The boot-to-ball strategy was also employed to great effect during Mont-de-Marsan’s stunning 34-11 victory over former leaders Nevers, with winger Jamie Taulagi showing great side-stepping work to burst down the touchline. He then chipped in-field for centre Jens Torfs to gather, leaving the Belgian unopposed to touch down.

And finally, Aurélien Callandret showed great upper body strength to finish off a lovely flowing attack for Oyonnax in their bonus point 32-16 win against Colomiers.

The race at the top of the league table could not be closer and it is indicative of the sort of action displayed in last weekend’s fixtures. Bayonne are a point ahead of Nevers, who in turn are tied in second place with Oyonnax on 51 points. Mont-de-Marsan and Brive are tied for fourth, just three points further behind, with Béziers rounding out the top six on 45 points.

And to think that there’s no fewer than 12 rounds still left to play before the crucial end-of-season play-offs even begin!