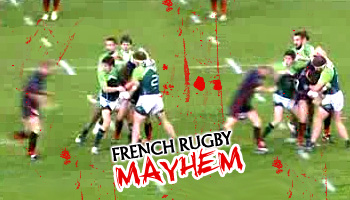 It was quite an eventful day for French Pro D2 rugby this past Saturday. Not one, but two huge on field fights in different matches resulted in yellow and red cards, one fan being taken to hospital, and a further tarnished image of the French second division.

The two games in question were Toulon vs Pau and Agen vs Mont de Marsan.

In the Toulon match, an inexperienced amateur referee contributed to the players frustrations, which started with a bad penalty try decision. He then sin binned George Gregan for talking too much.

The Pau side were desperate for a win, and played well until just before half-time, when flanker Costanzo had a go at Toulons hooker Philip Fitzgerald. That ignited the mass brawl, with 3 minutes of wild punching, including the benches joining the fray.

When waterboy for the day (and coach!), All Black legend Tana Umaga came on to calm matters down, the ref asked Umaga to leave, and when he didn’t he was promply red carded.

So, two yellow cards and two red cards were the result of a game in which the ref clearly lost control.

The Agen game was also madness, with another amateur referee struggling to maintain control. The fans got involved on the field afterwards, one was taken to hospital, and one of the Mont de Marsan players came out with a badly injured eye.

Shocking scenes that should never be seen on the rugby field.