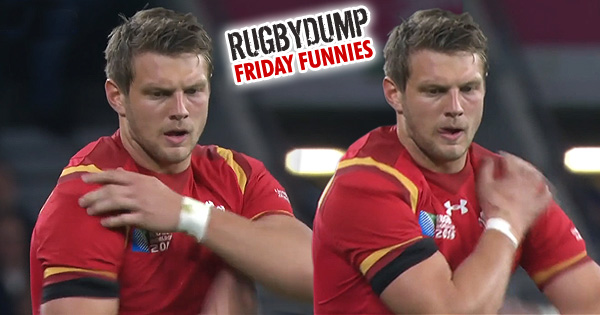 The role of goal kicker in any team is a mentally tough one, and throughout the years, many rituals or “ticks” have been used to prepare a player for a kick.

These rituals have stemmed from the practical side of James O’Connor, to the downright ridiculous, yet seemingly effective, adaptation of Rob Cook.

Last Saturday saw the dawn of another bizarre pre-kick routine, from Wales’ stand-off Dan Biggar. Needless to say, the internet took over and after Biggar kicked seven penalties and a conversion in his country’s 28-25 win over England, there was plenty of time to share random tweets, memes and in the case of down below, music videos about it.

Jonny Wilkinson’s famous stance caught on, but we doubt this will be the case with Biggar.

He was at it against last night against Fiji, as seen above, and only he himself is likely to know the significance of such a bizarre looking ritual. His impeccable form off the tee is clear proof though that whatever it is he does, it works. Now, do the Biggar Shuffle.